Diabetes and fertility health go hand in hand. As a result, if you’re trying to conceive, it’s important to know how you can be affected.

Both women and men can be affected by this chronic health problem. You may find that you have more difficulty when you start on your journey to get pregnant. It’s worth knowing what to expect and what can happen once you begin the journey toward creating a family.

Diabetes and Fertility Health in Men

Men who are diabetic generally have higher levels of blood sugar, also known as glucose. Glucose is controlled by insulin, which is produced by the pancreas. Individuals who are diabetic produce very low amounts of insulin or none at all. As a result, blood sugar levels increase. The sugars then transfer into the bladder. Diabetes causes infertility in men in the following ways:

Studies have shown that diabetic men have lower levels of semen than their non-diabetic counterparts. Higher blood glucose levels also decrease the man’s chances to impregnate a woman. 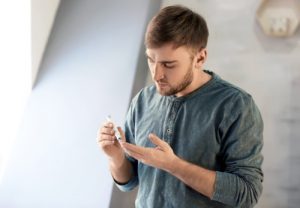 According to a study performed in Ireland, there is a link between the disease and infertility in men. The study showed that metabolic disease adversely affects sperm cells by resulting in genetic alterations in the DNA and RNA. It was further concluded that these changes could lead to miscarriage, cancers and birth defects if conception occurs. The damage to the reproductive cells was also determined to be irreversible.

It was also found that high levels of blood sugar in men cause damage to the DNA found in sperm due to the accumulation of advanced glycation end products or AGEs. These are unmodified sugar molecules that are added to fats and proteins that are normally regulated by enzymes in the reproductive tract. However, AGEs can raise one’s risk of some health conditions. When men have high blood glucose levels, the accumulation of AGEs is excessive.

Unfortunately, AGEs can also interfere with the normal appearance and function of proteins. As a result, if DNA suffers damage due to too many AGEs, it can result in fertility problems.

Diabetes and Fertility Health in Women

Men are not alone when it comes to fertility risks due to diabetes. Women’s ability to conceive is reduced if they have diabetes. The following health conditions can occur in diabetic women:

More Risks for Mothers and Babies

It should be noted that women with diabetes are not automatically guaranteed to have fertility problems. If the condition is properly monitored and balanced, the odds of experiencing a normal, healthy pregnancy are better. However, women who are diabetic and want to conceive need to be diligent about speaking with their doctors and getting their condition properly under control to avoid complications.

There may still be risks to the mother and baby even if implantation of the embryo successfully occurs. Damage caused to the embryonic cells from high levels of glucose in the blood increases the risk of birth defects and the chances of needing a C-section. It also increases the mother’s risk of developing gestational diabetes.

Treatment Options for Men and Women

Both men and women with diabetes can get treatment to improve their fertility health. For men, the following options are available:

Women can get the following treatments:

Diabetes doesn’t have to dictate your fertility health. If you get it under control, you can look forward to having the baby you’ve always wanted.