Home » Weight and Fertility: How Your Weight Can Impact Your Fertility

For couples looking to conceive, weight can be a contributing factor to fertility complications. Too little or too much extra weight in both men and women can affect various aspects of reproductive health and decrease their odds of conceiving.

Because so many people in the United States are overweight as compared to underweight, much of the focus on weight and fertility has historically been on the dangers of too much weight. However, in both women and men, very low weight can also negatively impact fertility by interrupting hormone balances

Finding a healthy weight and maintaining it can help balance the immune system and promote proper body functions, especially when it comes to reproduction. Unhealthy eating patterns, poor lifestyle habits, and genetic factors can all cause men and women to become overweight (obese) or underweight.

For women, the interplay between weight and hormone levels plays a crucial role in fertility. There is good evidence that weight extremes not only hinder 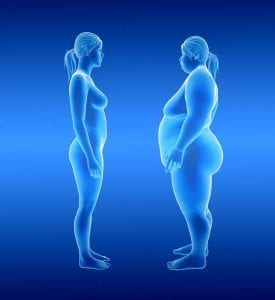 fertility but can also lower the success rates of in vitro fertilization (IVF).

While a majority of focus is put on obesity and fertility, very low weight can also negatively impact hormone balance in women, leading to a significant drop in estrogen and other sex hormones, causing several health problems along with difficulty conceiving.

On the other side of the scale, when women are overweight, hormonal imbalances, especially an overbalance of androgens, or male hormones, can make it much more difficult to conceive.

Ovulation, or the release of the egg from the ovary, is necessary for menstrual periods and pregnancy to occur. However, being underweight or overweight can interrupt this cycle.

Essentially, while weight in itself may not cause infertility, excess weight or an excessive decrease in weight is often indicative of a hormonal imbalance that can cause the explicit effect on ovulation and thus fertility.

Irregular Menstrual Cycle – For regular menstruation to occur a variety of signals and processes must be properly functioning. Simplistically speaking, the hypothalamus produces gonadotrophin-releasing hormones which then signal to the pituitary gland to produce two main hormones; luteinising hormones (LH) and follicle stimulating hormone (FSH). These hormones then signal to the ovaries that it is their turn to release estrogen and progesterone.

Because of the complexity of this process, if a single part of the cycle is off, the entire cycle will be thrown off, causing imbalances that can affect regular menstrual cycles.

Irregular menstrual cycles are often due to a disruption in hormones which ultimately leads to anovulation or failure of the egg to release from the ovary. Without the egg, pregnancy cannot occur. Irregularities that may occur are skipped menstrual cycles, heavy periods, periods lasting longer than usual, a short time between periods or spotting between cycles. Excess androgen production in women with PCOS and too much insulin in the bloodstream are two main reasons for these irregularities.

Likewise, the lack or cease of menstrual cycles altogether, known as amenorrhea, can result from rapid weight drop or significantly low weight.

Increased Estrogen Levels – The right level of the hormone estrogen is required to stimulate the release of the egg from the ovary to the fallopian tube each month. However, being overweight can throw the hormonal levels out of balance. Excess weight in women can cause an overproduction of estrogen, which can then prevent the egg from being released when it’s time to ovulate.

Insulin Resistance – Being overweight can lead to insulin resistance. When the body is unable to use the hormone insulin to remove glucose (sugar) from the bloodstream, the condition is called insulin resistance. Additional weight gain can then occur much easier since the body ends up storing the glucose as fat instead of burning it for energy. Insulin resistance is also a risk factor for diabetes and can result in trouble ovulating or failure to ovulate, irregular periods, or difficulty getting pregnant.

Pregnancy Complications Due to Weight

Sometimes, even though weight that’s too high or too low can get in the way of conception, it is possible to become pregnant. However, an unhealthy weight can cause problems that lead to miscarriage and other issues. For instance, obese women are more than two times more likely than women of a healthy weight to have a miscarriage. Gestational diabetes is also a concern, with obese women being more than eight times more likely to develop it and overweight women being twice as likely.

Women who are obese, while pregnant, are also at higher risk for infection, blood clots and other potentially damaging complications, including stillbirth. Likewise, women who become pregnant while underweight sometimes do not have enough body fat to support the baby. This can lead to issues with the health of the child.

While women’s weight is generally more directly related to fertility, men’s fertility levels can also be impacted by weight levels.

Not many people think of men’s weight as contributing to infertility, however, like the effects of weight on in women, men who are overweight, obese, or underweight, can also experience hormone imbalances that can affect their fertility as well.

The effect of obesity on paternal fertility has been studied thoroughly as far back as 2006. In a study from that year conducted by the Department of Urology and Andrology at the King Abdul-Aziz Hospital in Saudi Arabia, researchers found that there was a 10 percent increase in the odds of infertility for every 20 pounds of extra weight carried by a man. Additionally, studies show that overweight and obese men take a longer time to conceive a child, regardless of the weight of the female.

Both obesity and being underweight tend to result in hormonal imbalances that affect men’s sperm quality and quantity. It has been found that men who are obese or who are very underweight, tend to have lower sperm quality, which negatively impacts fertility. Sperm that has low motility, or those that are fragile, are less likely to be able to survive or successfully join with an egg, making chances of conception significantly lower.

Research conducted in 2017 finds a similar connection between a male’s weight and his fertility. Lead researcher, Dr. Gottumukkala Achyuta Rama Raju from the Center for Assisted Reproduction at the Krishna In Vitro Fertilization Clinic conducted a study involving over 1,200 men to determine what effect obesity had on sperm production, concentration and amount. Evidence indicates that obese men not only have fewer sperm but also a lower concentration of sperm per ejaculate than their healthier counterparts. Additionally, researchers found that excess weight causes an increased likelihood of sperm developing defects. The sperm of obese men were slower-moving and depicted abnormally shaped heads that causes decreased chances of conception.

These findings echo those from a 2012 study from Australia on the effects of weight on sperm function and shape.

Managing Weight to Improve Your Fertility

Studies show that weight loss does increase chances of conception, in males as well as females. In fact, research has shown that losing as little as five percent of body weight can dramatically improve a woman’s chance of getting pregnant.

In addition, a 2015 study published in Endocrine Society found that men who lost weight and led a healthier lifestyle had better rates of fertility than men who did not. This finding was independent of whether their female partner lost weight.

The best way to know if you’re carrying too much or too little weight is to talk to your doctor. A physician can help you determine if your weight is not ideal and if your current weight is getting in the way of your fertility.

For those looking to get a rough idea of their weight range, the body mass index (BMI) calculator is a common measure of general weight, however it is important to understand the limitations of this system: BMI calculators only take weight and height into consideration. There is no consideration of frame size and presence or absence of muscle mass. For instance, two women may be the exact same height. One carries extra fat mass, and the other is heavily muscled. Because muscle weighs more than fat, the more muscular woman may be unfairly categorized as “overweight” while the woman carrying an unhealthy overbalance of body fat falls into the “healthy weight” category. BMI calculators are good tools for estimation, but obtaining a doctor’s opinion is important before you make drastic lifestyle changes to alter weight. 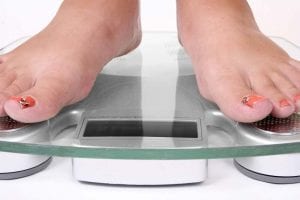 On average, BMI scales break down their results as follows:

While there are exceptions to the BMI scale, as an average baseline it can be a good starting point for determining one’s weight. One study showed that as a woman’s BMI went increases over 29 and she becomes borderline obese, her chances of conceiving go down by four percent compared to women within a normal BMI range.

If you and your doctor determine that you need to gain or lose weight to improve your fertility, you and your doctor or a dietician can design a plan to gain or lose weight accordingly and in a healthy manner, taking external factors into consideration, such as other health conditions, dietary restrictions, exercise routines, etc. In addition to working with you to provide a healthy weight loss approach they can also provide suggestions to maintain your healthy weight once it’s reached.