Home » Oral Hygiene and Fertility: Is There a Connection?

For many years, oral health has been known to have a direct effect on overall physical health. Chronic gum disease has been connected to Type 2 diabetes, heart disease, certain cancers and even miscarriage. More recently, poor oral health has been directly linked to fertility problems in both men and women. Poor oral hygiene leads to periodontal disease, which is infection or inflammation of gums and bones in the mouth. When periodontal disease is just beginning, it is called gingivitis. This is when gums become irritated and may start to bleed more easily. As periodontal disease progresses, the patient’s teeth may even fall out. The Centers for Disease Control reported in 2012 that an overwhelming 47.2 percent of adults aged more than 30 years have gum disease. 56.4 percent of men have this problem and 38.4 percent of women do, as well.

The National Center for Biotechnology Information of the National Institutes of Health published a study linking periodontal disease to low sperm count in May 2014. This study recruited 76 men who were experiencing fertility difficulties with their partners. Reported results stated, “For the first time, there appears to be a significant association between poor oral hygiene and subnormal sperm count.” These results were consistent across all participant age groups. 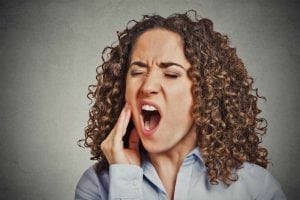 The study of oral hygiene and its role in male fertility followed a similar study’s findings in regard to female fertility. University of Western Australia research of July 2011 indicated that women with poor oral health take about two months longer to conceive a baby, as compared to their counterparts with good oral health. As part of this groundbreaking study, 3500 women attempting to conceive participated in oral health research. Of those, the ones with gum disease required seven months to become pregnant. A healthy woman usually only requires an average of five months to successfully conceive. From these results, it appears that poor oral health affects fertility as much as obesity.

Why Conception Is Delayed By Poor Oral Health

When the female infertility link to gum disease was first reported, lead researcher Roger Hart clarified why poor oral health can affect fertility. In essence, inflammation allowed to continue without control interferes with much of the body’s normal functioning. Just as gum disease’s effect on the immune system can lead to diabetes, heart disease, cancer and other illnesses, fertility becomes more difficult when periodontal disease goes unchecked.

Improving Fertility of Both Sexes Through Better Oral Health 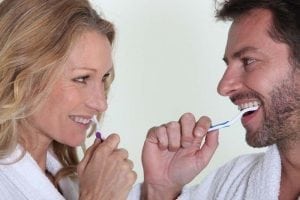 Lead researcher Hart indicated that better oral health can likely improve a woman’s chance of conceiving. Hart said, “This is the first report to suggest that gum disease might be one of several factors that could be modified to improve the chances of a pregnancy.” Equally as important, the American study reported through the National Institutes of Health infers the same for male fertility. For better oral health and to possibly improve fertility, dentists make the following recommendations: