Often an egg has been successfully fertilized, but implantation in the uterus still doesn’t occur. For this process to work, certain conditions must be met to increase the success of implantation and overcome implantation difficulties.

What Happens During Implantation?

The fertilization itself takes place in the fallopian tube. Then the fertilized egg cell makes its way to the uterus—a journey that takes about four days, during which the egg cell divides itself every 12 hours. If the egg reaches its destination, the cells divide into an outer and an inner cell layer. The outer cell layer then develops into the placenta and the inner layer develops into the embryo. After about six to nine days, the egg can either successfully implant itself in the uterus, which ideally has formed a thick endometrium or the egg dies and is excreted during the next menstruation. Among other things, which spot the fertilized egg seeks out in the uterus is determined by corresponding attractants. Once implantation has occurred, the hormone HCG is produced, which indicates a positive pregnancy. 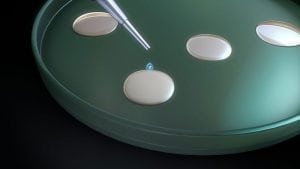 Implantation does not always take place. About 40 percent of all fertilized eggs do not result in a successful pregnancy. In order for the embryo to implant itself, it must make contact with the endometrium, which must offer the right conditions for implantation. External influences such as stress, a poor diet, physical exertion or certain environmental factors can prevent implantation. Sometimes the egg may not make it to the right place and implant itself outside of the uterus.

An ectopic pregnancy occurs when the embryo implants itself in the wrong place, namely in the lining of the fallopian tube. This type of pregnancy, which occurs in about one to two percent of all pregnancies, can never be successfully carried out. In some cases, the egg can also implant itself in the ovaries, the cervix or the abdominal cavity. An ectopic pregnancy often ends in miscarriage during the very early stages of pregnancy, but can also continue to grow. Risk factors include previous ectopic pregnancies, endometriosis, tubal inflammation, surgery on the abdomen or pelvis and artificial insemination. Many women never become aware of an ectopic pregnancy, and others do not feel any pain until the embryo has become bigger and causes strong bleeding.

Implantation problems often occur with artificial insemination methods such as IVF. Often, successful implantation isn’t possible even after several embryo transfers. There are many reasons why implantation might fail. These include uterine malformations, vascular disorders and immunological responses. Chromosomal abnormalities, unfavorable laboratory conditions, the wrong technique during embryo transfer as well as inadequate sperm quality can also be the cause of implantation failure.

Measures to Support Implantation with IVF

If the embryo has successfully left its shell, implantation in the endometrium must follow. However, sometimes the embryo does not succeed in attaching itself to the uterine lining. A special medium (EmbryoGlue) containing hyaluronan is supposed to increase the likelihood of implantation by acting as an adhesive and facilitating contact between the embryo and the endometrium.

In order for the embryo to implant itself, the endometrium must offer optimal conditions. U.S. studies have shown that “G-CSF” supports embryo implantation and helps ensure that a pregnancy can be successfully maintained. By applying FertiGrow to the uterus, the endometrium can be enhanced, and the chance of implantation increases. 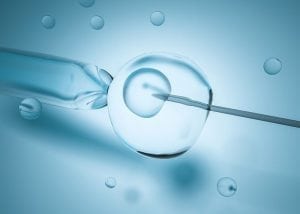 Certain hormones play an important role in successful implantation. Six days after the follicular puncture, a medication to promote hormone production is injected in order to improve the implantation chances of the fertilized eggs. Studies have also shown that scratching the uterine lining (a deliberate, local injury to the endometrium) can increase the likelihood of successful implantation.

Various studies show that using this method can help improve the implantation rate as well as the live birth rate. The procedure uses an intravenous emulsion that is based on soybean oil and suppresses the activity of natural killer cells.

Embryo implantation into the endometrium can only take place during a certain time window. This implantation window is usually between the 19th and 21st day of the menstrual cycle. The ERA test is used to evaluate the receptivity of the endometrium in order to determine when the uterine lining is ready for implantation, i.e., on which day the embryo transfer should take place.

Semen also plays a role in the embryo’s ability to successfully implant itself in the uterine lining. Studies show that certain components of semen are essential to promote implantation. Intracytoplasmic sperm injection involves separating part of the seminal fluid from the cellular components. The seminal plasma is then injected into the uterine cavity.

A simple yet very effective measure to enhance the implantation rate is to lead a healthy lifestyle. A balanced diet with the right vitamins and trace elements can improve implantation chances. This change should be made at least four months prior to trying to conceive. Unhealthy habits such as eating fatty foods, consuming alcohol and nicotine, not exercising and being stressed can cause implantation problems and should be replaced with healthier habits. Caffeine should also be avoided (no more than one cup per day) because it can delay a successful pregnancy and decrease egg cell quality.

Whether an embryo can implant successfully depends on a variety of factors, and there are a number of measures to facilitate this process. Ultimately, nature itself still decides whether a pregnancy occurs or not.