Home » The Real Odds of Getting Pregnant

When it comes to conception every couple experiences the journey differently. For some, pregnancy may come just as easily as the sunrise, while for others this can be a tiresome process of months with no luck. That in mind, are there real, true odds when predicting if a couple will become pregnant? According to several medical professionals, the answer is yes.

The General Odds of Conceiving

When looking at the odds of conceiving, a collection of English researchers studying the topic concluded that couples engaging in consistent, unprotected sexual intercourse stood a 20 percent chance of conceiving a child over the course of a month. These same scientists also opined the odds rise significantly if couples practice these same sexual habits over longer durations of time. Thus, those who make love on regular basis over the course of a sixth-month timeframe increase their chances to 70 percent, 85 percent for a year, 90 percent over a year-and-a-half and an astounding 95 percent within two years. 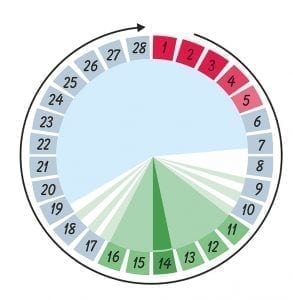 Medical professionals advise that the chances of achieving conception during menstruation are minute. This is because a woman’s ovaries are first preparing eggs for release and, since these eggs are not ripe, sperm stands very little chance of successfully fertilizing them.

Physicians suggest this stretch of time following menstruation is a good time for couples to attempt conception. Though the ovaries do not yet release eggs during this period, pregnancy experts say sperm can survive in a woman’s cervical region for several days, thus couples looking to conceive may increase their chances if sperm are already in place and/or if by chance the woman ovulates earlier than usual.

This period of time is considered the most opportune time to take a stab at conceiving. When a woman is ovulating, the eggs her ovaries release are ripe and most able to become fertilized by sperm.

This final phase of a woman’s monthly cycle involves the ovaries ceasing to release any more eggs. Therefore, the chances of conceiving during this luteal phase are thought to be low.

Factors That Can Alter the Odds of Conception

While standard fertility rates and odds are a general rule of thumb, there are numerous external and medical factors that can increase or decrease a couple’s odds of becoming pregnant.

Arguably, age is the most significant determinant impacting a woman’s odds of becoming impregnated. Typically, a woman’s peak fertility rates occur when she is between the ages of 23 and 31. At age 30, most fertile, otherwise healthy women have a 20 percent chance of conceiving at any time following intercourse. However, after the age of 31, fertility levels diminish roughly three percent a year and, by the time a woman reaches the age of 40, this amount further decreases to somewhere over three percent, making the chances of achieving conception stand at only five percent during her monthly cycle.

To promote conception, it’s important to maintain a positive lifestyle, as negative habits can have a negative impact on both men and women’s fertility. Choices such as poor diet, strenuous exercise, excessive alcohol consumption or caffeine intake, smoking and medical or recreational drug use all take a toll on fertility.

In today’s environment of technology, chemicals and substances, the environment around us has in increased impact on affecting fertility than is commonly realized. Such factors include pollution and various every-day chemicals.

While it is known that excessive weight or underweight problems impact on general health, possessing excessive or insufficient body weight can precipitate hormonal imbalances that could interfere with becoming pregnant.

Believe it or not, many factors play in to genetics when it comes to the odds of conceiving. It is not out of the question that if a woman’s mother experienced conception challenges, the chances are greater that she might as well face difficulties when trying to conceive.

Certain illnesses that affect the reproductive tract and fertility rates can, at times, go undetected and elicit unknown fertility struggles. Factors such as genetic concerns, diseases, and other ailments such as PCOS or endometriosis can decrease the odds of getting pregnant in the standard period of time.

While the odds of getting pregnant may seem high at first glance, some couples face a variety of obstacles that may vary their probabilities more so than the next.