Home » Caffeine and Fertility a Concern for Both Men and Women

There is a negative effect between caffeine and fertility for both men and women, but the problem diminishes with lower levels of caffeine intake and vitamin supplementation. Numerous studies now show the problems stemming from large amounts of caffeine start even before conception, and the effect is an increase in the rate of miscarriage and difficulty getting pregnant. Eliminating or reducing caffeine intake and taking prenatal vitamin supplements are associated with healthier pregnancies and easier conception.

New Study on Caffeine and Fertility

In a recent study conducted by the National Institute of Child Health and Human Development, the link between high levels of caffeine, miscarriage and difficulty achieving pregnancy was strongly supported. This is not the first such study, but it is one of the first prospective studies using actual human couples of childbearing age.

A total of 344 couples in the states of Michigan and Texas were recruited for the study, published in the research journal Fertility and Sterility. All couples were trying to conceive. Participants tracked all consumption of caffeine in every form, as well as fish and alcohol intake. Eating certain fish and drinking alcohol are also implicated in problems with pregnancy, but the results reported here are for caffeine and fertility only.

The study volunteers reported regularly for blood, saliva, semen and urine tests. Their weights and overall health were also recorded. Women were also given regular pregnancy tests. At the end of the study period, 28 percent of couples had experienced a miscarriage. Women over 35 years old had two times this rate. Higher rates of miscarriage in older women has been well-established in the medical literature for a long time, so this result was expected.

However, the strength of the association between fertility and caffeine consumption and the effect being present in men as well as women was unexpected.

All forms of caffeine were lumped together in the study and included coffee, tea, soda, chocolate and energy drinks. Consuming three or more servings of caffeine-containing foods or beverages a day corresponded to a miscarriage rate of 74 percent. This result was seen even if the caffeine consumption was before conception, and it was true for the men’s consumption of caffeine as well as women’s. 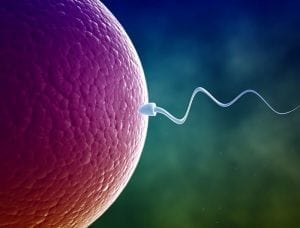 In other studies, women who drank as little as one cup of coffee a day had half the rate of becoming pregnant compared to women who consumed less or no caffeine. Patients in an in vitro fertilization study who consumed even 50 milligrams of caffeine daily had a statistically significant decreased birth rates.

Many doctors and researchers have also noted pregnant women frequently develop an aversion to caffeine when they get pregnant. This strengthens the conclusion that there really is something in caffeine which is not good for pregnancy.

Animal studies have revealed that the negative effect of caffeine on conception and pregnancy is related to the development of the egg, although the exact mechanism has still not been identified. Preliminary research points to caffeine inhibiting the maturation of the oocyte. At this time, no absolute safe level of caffeine intake has been established, and many doctors suggest cutting out caffeine altogether during conception and pregnancy, if possible.

Other doctors think small amounts of caffeine may be better than the consequences of caffeine withdrawal for prospective parents. Dr. Zev Williams, a spokesman for the American College of Obstetricians and Gynecologists cautions against going “cold turkey” on caffeine.

“I have frequently seen women quit caffeine cold turkey then develop rebound symptoms like headaches and then resort to headache medicines. These medications may be as harmful as caffeine.”

Researchers involved in the study also noted that women who took a specially formulated prenatal supplement of B vitamins, especially folic acid, were 50 percent less likely to have a miscarriage than those who did not take a supplement.

The results of this study confirms that both men and women who are trying to conceive a pregnancy should avoid or reduce caffeine intake, and women should take a prenatal vitamin supplement to increase the chances of having a healthy pregnancy.