Hyperprolactinemia and infertility are two conditions that are often misdiagnosed, and they can be very frustrating to find a solution for. About 40% of women experience infertility issues without even knowing the cause. Since prolactin is an essential hormone in reproductive health, it is crucial to understand what causes high prolactin levels and how they impact fertility.

In the past, many women were diagnosed with hyperprolactinemia (high prolactin levels) before being screened for reproductive disorders. However, this misdiagnosis is now known to be incorrect almost one-third of the time. Even when prolactin levels were still misdiagnosed, it was believed that only a very small number of women were affected by them. That is no longer the case. Hyperprolactinemia and infertility are now known to affect up to 40% of couples trying to conceive.

If you suspect that you have hyperprolactinemia, the first step would be to have a thorough hormone panel done to determine your prolactin level. There are many different names for this, but it is often referred to as a PRL test. When you get a PRL test, your doctor will measure serum prolactin levels (the most accurate way to measure prolactin levels) three times: before breakfast, before lunch and then again two hours after eating.

Women with high prolactin levels can be diagnosed with hyperprolactinemia or polycystic ovary syndrome (PCOS). 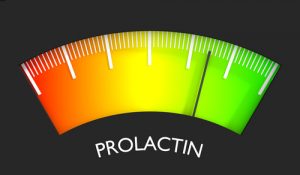 One of the leading causes of increased levels is stress and anxiety, leading to prolactin’s overproduction in men and women.

Some medical conditions also affect the production of prolactin, like hypothyroidism and pituitary tumors. High prolactin levels can also happen in people with a genetic disorder known as congenital hypopituitarism, where there is a deficiency of an enzyme necessary for prolactin to be produced. It has also been known to occur in people who have received a pituitary irradiation treatment that temporarily caused hypopituitarism.

Furthermore, some medications can lead to elevated levels of prolactin. This is the case with estrogen-containing contraceptive pills and certain drugs like amiodarone and tricyclic antidepressants.

Some over-the-counter medications can affect a person’s ability to properly process prolactin, such as nasal sprays that contain epinephrine or pseudoephedrine, some herbal remedies and stomach acid suppressants.

How Does Hyperprolactinemia Affect Fertility Health?

Prolactin is an essential hormone. It is responsible for stimulating and maintaining the breast milk supply. However, it also has other effects, such as increasing the size of the uterus, inhibiting ovulation and decreasing sensitivity to the FSH (follicle-stimulating hormone). Women with high prolactin levels may have difficulty getting pregnant if their prolactin levels are high enough.

Prolactin can also cause headaches and migraines. The headaches may be triggered by a prolactin-induced increase in body temperature or an increase in the production of chemicals (i.e., estrogen) in the brain.

If you have elevated prolactin levels, there are some very simple and natural options for treating them.

Coffee enemas are a great way to detox the liver. The coffee enema acts as an internal detoxification method, helping to remove harmful waste from your body and cleanse the liver. The caffeine in the coffee helps stimulate the liver, which increases bile flow from the gallbladder (which is a critical component of removing toxins). This is an excellent way to deal with cramping, bloating and bad breath (fatty liver) issues.

The elimination diet cleans the colon (large intestine) by removing foods as you gradually introduce new foods. This helps to restore balance and healthy digestion to your body. Some people with this condition also benefit from this approach.

It should be noted, however, that not everyone benefits from this approach. It’s best to try the elimination diet if you haven’t already made other dietary changes.

What Supplements Can Help You with Hyperprolactinemia?

Vitamin B6 and folic acid are essential in forming new cells. It has been suggested that supplementation of these vitamins may help with fertility issues. Taking B6 and folic acid together is a good idea, especially if you are taking medication for high prolactin levels of your own accord.

You can find folic acid in beans, bran, cauliflower and spinach. Vitamin B6 can be found in food sources such as bananas, chicken, fish and whole grains.

Black cohosh is a popular herb right now. It has been shown to help with symptoms of menopause, including hot flashes and night sweats. However, it also helps prevent inflammation and reduce breast tenderness associated with hyperprolactinemia.

In conclusion, hyperprolactinemia can cause many symptoms, including menstrual irregularities, headaches, migraines and fatigue. Many treatments for this condition include coffee enemas and the elimination diet. If you suspect that you may have elevated prolactin levels, contact your doctor as soon as possible to make an appointment.