Ovulation for many women is shrouded in mystery. Many women don’t always know when it will happen, and can often be confused about the best time to try for a baby. Thus, when it comes to fertility and conceiving, if you’re trying to know more about ovulation and how to properly determine when it takes place, you may have come across an abundance of information.

Everything from how to track ovulation, to understanding irregular ovulation and how to use ovulation kits. What you also may have come across are some common misconceptions and myths about ovulation. In fact, there are many old wives’ tales about ovulation, and it can be hard to separate fact from fiction.

So, here we strive to bust some of the most common ovulation myths to help you understand it all, and help you on the road to a successful and healthy conception.

Ovulation Myth #1: You Always Ovulate on Day 14 of Your Cycle

It’s true that for some women, ovulation does occur like clockwork on day 14 of their cycle. But this isn’t the case for all women, in fact, ovulation can happen at any time during your cycle. Ovulating as early as day 6 or as late as day 20 isn’t uncommon, and it’s not always consistent from month to month. In general, the cycle length usually determines the ovulation day, so for women who have a shorter cycle, ovulation may occur earlier, and vice versa.

Ovulation Myth #2: You Can Only Get Pregnant During Ovulation

While you are more likely to get pregnant during ovulation, it is possible to get pregnant at other times during your cycle. This is because sperm can survive in your body for up to five days. So, if you engage in unprotected sex during the five days leading up to ovulation, there’s a chance that the sperm will still be alive when ovulation occurs.

Ovulation Myth #3: You Can Feel When You Ovulate

Some women claim to be able to feel when ovulating, however there is no scientific evidence that supports this. Ovulation is a tiny event, and it’s unlikely that you would be able to feel it happening, although in some cases there may be some signs of ovulation such as a softened cervix, rise in boy temperature or boost in libido, but these are not consistent symptoms. The cramping and discomfort that around 20 percent of women feel during ovulation are usually due to the release of the egg from the follicle, which occurs before ovulation and is referred to as mittelschmerz.

A woman’s basal body temperature (BBT) increases during ovulation, but this increase is very small and is not always easy to detect as the BBT is the body temperature when you’re at rest, and is usually lower in the first half of a cycle. Thus, for women tracking BBT for fertility tracking, taking a temperature measurement each day as soon as you wake up each morning is best for the most accurate measurement.

Just before the body releases an egg, BBT will dip by around 0.4-1.0 degrees Fahrenheit, then 24-hours after the egg’s release, temperature will rise slightly and stay elevated for several days. The two to three days prior to this temperature increase are the most fertile days.

Ovulation Myth #5: You Can Only Get Pregnant During the Night

We aren’t quite sure where this myth came from, but we can assure you, there is no factual data behind it. The ovulation process lasts about 24 hours, so the chances of fertilization are highest within that 24-hour time frame or one day beforehand, since sperm can live longer than 24-hours. So, there is a good chance of getting pregnant in the morning and night within the fertile window when ovulation occurs. 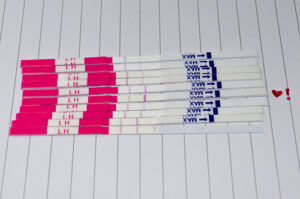 Ovulation test kits are a popular way to predict when ovulation occurs by means of testing for the presence of luteinizing hormone (LH) in urine. LH is the hormone responsible for triggering ovulation, and it increases shortly before ovulation occurs.

Although these tests can accurately predict when a woman will begin to ovulate, it is not impossible for a woman to have other hormonal things going on that could cause the tests to become inaccurate. For example, women with polycystic ovarian syndrome (PCOS) can have peaks of LH before the peak that signals egg release.

For a detailed look at Understanding Ovulation Kits and When to Use Them, click here.

This myth circles back to the myth number one. Although calendar tracking is a popular method of predicting ovulation, it’s not always accurate. This is because it relies on your regular cycle, which isn’t always the case. Regular cycles are defined as between 21 and 35 days long and occur at approximately the same time every month. But, many women have cycles that are longer or shorter than this, and they may not happen at the same time every month. So, calendar tracking may not be an accurate tracking method for all women.

Ovulation Myth #8: You Only Ovulate if You Have Regular Periods

For those trying to become pregnant, tracking ovulation can be an incredibly powerful tool mainly because, for some women period tracking alone is not always accurate. In addition, in some cases, a woman can ovulate and become pregnant without having a period. A woman’s period can stop for many reasons, including low body weight and perimenopause. This does not necessarily mean that ovulation has stopped however. In addition, the opposite can also occur in which a woman will have a period without having ovulated, also called an anovulatory cycle.

Ovulation is a complex process, and many ovulation myths and misconceptions exist. If you’re trying to get pregnant, it’s essential to be as informed as possible about how the ovulation process works. If you’re using ovulation prediction methods, like ovulation strips or calendar tracking, be aware that 100 percent accuracy may not always be achieved. The best way to predict ovulation is to follow multiple tracking methods and track your menstrual cycles to look for patterns. If after consecutive months you find that you are unsuccessful with ovulation tracking and conception attempts, following up with a doctor or fertility specialist to ensure ovulation is occurring regularly is recommended.