Home » Understanding Ovulation Kits and When to Use Them

Figuring out when to try getting pregnant can be hard. Some people leave it up to chance. Others choose to seek the help of a fertility specialist who can help them achieve pregnancy through medical intervention. Yet others decide to track their fertility themselves and use at-home ovulation kits, to help them determine the best time to try for a baby. These kits are extremely helpful for many parents in choosing the best time to try building a family.

Ovulation is one of the steps of the monthly menstrual cycle. During this phase, an egg is released from one or both of a woman’s ovaries. Once released, the egg travels through the Fallopian tube. It is during this time that a sperm cell can fertilize the egg cell, resulting in pregnancy. If the egg cell is not fertilized, the menstrual cycle will carry on as usual.

Typically, this process lasts about one day and happens around two weeks prior to when a woman usually has her period. The exact timing of this process varies by woman and can even change month to month in individual women. During this time, a woman is at her most fertile, making it the ideal time to try to build a family. A woman who has regular periods every twenty-four to thirty-two days is likely ovulating successfully.

When a woman is ovulating, her uterine walls thicken to prepare to support the fetus for the next nine months. When a fertilized egg does not implant on the uterine wall, the wall is shed, and a woman has her period. The building up of the wall and bleeding are also influenced by estrogen and progesterone, respectively. This means that having a period does not necessarily imply that a woman is ovulating.

There are potential problems that can stop a woman from ovulating. Inflamed or blocked Fallopian tubes can stop this process. Surgeries for ectopic pregnancy or other fallopian tube procedures can interrupt a woman’s ovulation. Being underweight, stressed or physically exerted can also stop the ovaries from releasing an egg. This is likely influenced by hormones that help regulate the menstrual cycle. 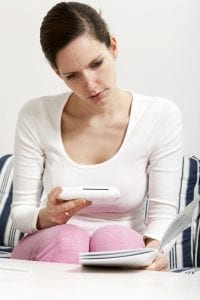 At-home ovulation kits can be bought at over-the-counter drug stores. These kits can be used to help a woman plan the best times to attempt to get pregnant. They are also helpful in determining if a woman is ovulating. If you have predictable period but are not getting pregnant, one of these tests can help to check if you are ovulating. From there, you can choose to seek medical care or alternative routes to having a child.

An at-home test uses a urine sample to test for the presence of luteinizing hormone (LH). LH concentration, while always in the urine, spikes when a woman is beginning to ovulate because the hormone causes the ovary to release an egg. It is recommended that a woman begin to use an at-home kit around ten days after the beginning of her last period. This should be the time when LH begins to spike, signaling the start of an egg’s release.

Although these tests can accurately predict when a woman will begin to ovulate, it is not impossible for a woman to have other hormonal things going on that could cause the tests to become inaccurate. For example, women with polycystic ovarian syndrome (PCOS) can have peaks of LH before the peak that signals egg release.

Trying to become pregnant can be challenging and stressful. Some women have an extremely challenging time even when there are no other factors influencing the release of an egg. Using an at-home kit and being aware of the steps of the menstrual cycle are essential to increases one’s chance for success.