Ovulation is accompanied by some distinct symptoms, such as temperature fluctuations and cervix changes, that make it easy to track.

During ovulation, a fertile egg is released from the ovary, and it travels down to the uterus where it can be fertilized by sperm. This time normally happens about two weeks after your period starts, but each woman is different. Being able to recognize when you are ovulating can help you to understand your menstrual cycle more clearly and find the best times to have sex if you’re trying to conceive. You can use these symptoms to figure out if you are currently ovulating.

The hormones shift as a fertile egg is released, and the heightened levels of hormones often cause women to feel a stronger sense of libido. This is often the body’s gentle way of encouraging you to reproduce. You might notice that you are checking out people more frequently, or you may be attracted to those you normally would not find appealing.

Women who are ovulating may find that they feel a signature-type of pain during this process. Pain that accompanies ovulating feels like a slight ache or twinge in the lower abdomen. It is typically on either side, and some women may feel it slowly move downwards. This sensation is actually the process of the egg moving from the ovaries, down the fallopian tubes, and into the uterus. It normally does not last for more than a couple minutes, but some women report feeling it for a few hours.

The cervix sits right at the opening of the uterus, and it softens to allow sperm to pass more easily when a woman is ovulating. Checking for this symptom will require you to become very comfortable with your body and regularly test your cervix. You can do this by putting your finger inside the vagina and gently feeling along your cervix. Some women find it helpful to stand and raise one leg, resting the foot on the toilet seat to more easily find the cervix. You will find that the cervix typically feels firm, somewhat like the tip of your nose, but when it softens, it will feel more like the texture of your lip. 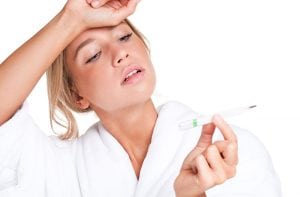 During the process of ovulating, your body attempts to make it easier for an egg to be fertilized. Most women produce extra secretions along the vagina and cervix at this time. These long, sticky strands help to guide sperm upwards toward the uterus. You may notice that you have more discharge than usual, and the discharge will have a slippery, wet and sticky feeling. This type of mucus is typically clear or about the shade of egg whites.