Home » A Journey Through Unexplained Infertility

We waited two years before trying to start our family and, because in our blissful ignorance we didn’t think we would have any trouble getting pregnant, we waited.

Since I was going back to school for my masters and we thought that with the added stress maybe that was why we weren’t getting pregnant, we waited two years before seeking professional help. We timed intercourse with ovulation kits more times than I can count. When we finally went to my OB for help and we did three to four more rounds of timed intercourse with medications, which were all unsuccessful. The next step was two rounds of IUI with the OB which again were unsuccessful.

We then decided to seek treatment with an actual fertility doctor and we met with the Fertility Center of Illinois at the beginning of 2016.

We had testing completed and it was determined that we had unexplained infertility. We started right away with IVF.

We had our first egg retrieval right away, in early 2016. We could not do a fresh embryo transfer at that time due to my labs being off, but we had four embryos that we froze. We spent the rest of 2016 and 2017 having failed IVF FET cycles. I would always get a positive pregnancy test, but by the time the second HCG level was drawn it already started to decline. Before our last embryo transfer in October of 2017, I had ERA testing since I kept having failed cycles. Of course, that came back normal as well. We proceeded with our last transfer in November 2017 and we placed two embryos at this time to hopefully increase our chances of getting pregnant. Again, we had a positive pregnancy test but two days later it again started to decline. 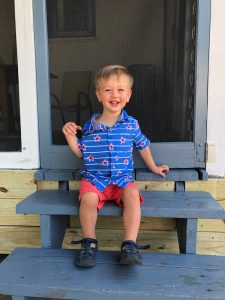 We were crushed physically, mentally and spiritually. I was preparing myself that maybe we were not meant to have children. I didn’t think that I could go through this pain anymore. My husband and I talked and we always said that we would give IVF two full cycles including egg retrievals. We took the months of December and January off to heal and we decided to go through with one last try. We were planning on doing a fresh transfer if everything looked good and would plan on freezing the rest of the seven embryos to do PGS testing on them for hopefully an answer as to why we weren’t getting pregnant. We had a total of eight embryos that survived. We transferred the best-looking embryo and sent the rest off for testing. I was not optimistic at all that this cycle would be any different from the previous three. I was already preparing my heart for, yet again, another failed cycle. We again had a positive HCG and two days later it had doubled and it continued to double! We had our six-week ultrasound and there was a heartbeat! We could not believe that our miracle was growing inside me. Throughout the entire pregnancy, we were still very cautious and kept saying we really won’t believe we are pregnant until we have this baby in our arms. My entire pregnancy was a breeze which it should be after all that we went through. We waited to find out the gender and 2,145 days since we started our journey to become parents on 11/19/2018 we were blessed with our son, Caden.

We are now continuing our fertility journey trying to grow our family.

Out of the seven embryos we had left, we had four that were completely genetically normal, two that were unknown due to the DNA degrading before testing could be done, and one that was genetically abnormal. We started to try naturally to have another baby in the summer of 2019 which we were unsuccessful and in March of 2020, we decided again to pursue IVF. Well as we are all well aware of COVID-19 happened and all cycles were stopped.

In June 2020 we got the go-ahead that we could resume our treatment and on 6/28/2020 we had our FET and transferred one of our embryos…a little girl. We didn’t want to know the gender of the embryos however the doctor accidentally let it slip that they were transferring a girl embryo. We were over the moon starting to prepare for a little girl. We knew we would get pregnant because I had already been pregnant once and had an uncomplicated pregnancy with a healthy baby boy. Well on 7/3/2020 we found out that we were not pregnant. We were again crushed that we would not be welcoming our baby girl into this world. We met with our doctor and she did not know why we were not successful. We took the month of July off and decided to restart in August with a different protocol with hopefully better results.

Throughout all of this, Chris, my husband, has been my rock and my biggest support system. This has also been the hardest thing that our marriage has gone through, but it has made us stronger as a couple. No one tells you when you get married that when you want to start a family it may not happen right away and you may have a whole team of people involved with you in creating your family. My faith has also played an integral role during our infertility journey. I don’t know why God is allowing us to go through this, but I do know that HE is in control and HE will guide us through this.

We are the Jannusch Family. Chris (husband/dad), Liz (wife/mom), and Caden (20 months). Thank you for hearing our story.