Couples struggling to have a baby are often diagnosed with infertility, but no genetic cause can be identified. A research group from Baylor College of Medicine, headed by Dr. Ignatia Van den Veyver, recently published a paper that identifies how gene mutations in the Nlrp2 and Nlrp7 genes cause infertility. Their study shows that Nlrp gene mutations impair embryo development using in vitro cell models, similar to clinical IVF treatments, as well as a genetic mouse model that has fertility problems because it is missing the Nlrp gene. These new findings can be helpful for future diagnosis of some cases of infertility and allow better genetic counseling and clinical advice for couples that are having trouble conceiving a child.

Infertility is a problem that many couples have to face, with over 10 percent of women having some degree of reproductive complication. Of all cases of infertility, approximately 10-15 percent do not have a clinically identifiable cause. For couples that have had three or more miscarriages, that number jumps to 50 percent. Research has shown that genetic factors associate strongly with reproductive disorders. However, the frequency of unexplained infertility shows that there are still large gaps in our understanding of reproductive disorders.

What We Know About Infertility

Scientists have identified several gene mutations that play a role in normal reproduction and cause reduced fertility when they are mutated. Infertility or reduced fertility can have many forms including embryos that are unable to properly implant, miscarriages or pregnancies brought to term with major developmental disorders. At the heart of these problems are defects in the cellular functions that allow a fertilized egg to grow and develop into a healthy fetus.

One important part of this machinery is called the Subcortical Maternal Complex (SCMC), which is a region of the egg that is stocked with proteins that allow proper development before the embryo is able to start producing its own proteins. When an egg is fertilized, the sperm contributes very little besides the father’s DNA. The consequence is that these initial essential proteins come only from the mother. This means that any mutations the mother carries that alters the SCMC will directly influence reproductive viability, whereas SCMC gene mutations carried by the father will not. 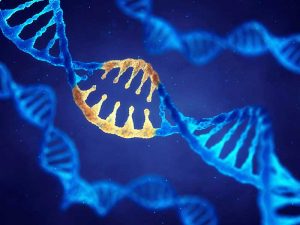 Researchers have identified several genes that contribute to the SCMC and mutations in these genes have previously been shown to cause reduced fertility. One way that the SCMC regulates embryo development is by maintaining DNA methylation, which are small modifications to the DNA that control which parts are turned on or off. Improper DNA methylation causes dysfunctional gene expression and can lead to infertility. Mutations in the genes Nlrp2 and Nlrp7 have been known to be associated with fertility problems, although the function of these genes was previously unknown.

Nlrp Contributes to the SCMC

A recent article in the journal Scientific Reports describes research that shows that the Nlrp2 and Nlrp7 genes are a component of the SCMC and mutations in these genes contribute to infertility. The researchers demonstrated that Nlrp gene mutations alter the function of a methyltransferase gene called DNMT1.

These findings are important because the Nlrp genes were not previously known to be a part of the SCMC. Additionally, the discovery that Nlrp2 regulates normal embryo development through DNA methylation defines the mechanism by which Nlrp2 gene mutations cause infertility.