A chemical called molybdenum might affect fertility levels. Though often overlooked, this nutrient is vital to human health and commonly found in a number of healthy foods and beverages.

Though many people have likely never heard of molybdenum, the substance executes important systemic functions. Scientists categorize the chemical as an essential mineral, meaning the body cannot function without receiving adequate quantities of the nutrient. Molybdenum is present in soil. Ergo, persons absorb the substance after consuming plants raised in such soil and meat from animals that eat those plant products.

Molybdenum’s major purpose is its contribution to the body’s toxin-elimination process. The chemical plays a critical role in helping the body produce enzymes that are paramount to stimulating the excretion of waste.

Fortunately, molybdenum deficiencies are quite rare because the nutrient is discernible in numerous commonly consumed foods. In the unusual event a deficiency exists, the typical cause is some type of genetic mutation inhibiting the body’s capacity to properly synthesize the substance.

Though not common, excessive molybdenum intake does occur. Medical experts maintain that such events do not often occur in relatively healthy individuals because the chemical is abundantly eliminated in urine. Therefore, unusually high systemic concentrations may signal potentially serious underlying health problems, such as kidney disease. That said, researchers have found that cases have also occurred in individuals employed in the metalwork and mining industries, in addition to global regions where soil content is excessively elevated. 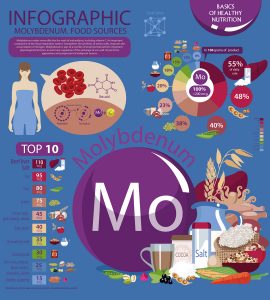 Considering the nutrient is abundant in soil, it is not surprising that the vast majority of food sources containing discernible quantities are plant products like lentils, leafy green vegetables, most varieties of beans, tomatoes, grain products, eggs, nuts and seeds. Additionally, smaller traces of the nutrient can be found in milk and other dairy products and the meat of animals that commonly feed on these plant products.

When excessive intake occurs, several untoward systemic effects can result. Increased amounts of the nutrient can interfere with the body’s ability to digest other vital nutrients, such as copper. As the ailment progresses, afflicted individuals might experience manifestations including painful joints, tiredness, mood swings, ocular problems, skin irritations and digestive disturbances. Severe occurrences could precipitate more significant issues like stunted growth and possibly even anemia.

Research studies have concluded that excessive intake of molybdenum might have notably adverse effects on both male and female reproductive systems and subsequent fertility levels.

One study performed examined the effect of excessive intake on male rats. Researchers administered the subjects varying dosages five days a week over a two-month period. The examiners discovered that those given the highest doses experienced a decrease in the size of various reproductive components, including the testicles. Moreover, the subjects witnessed sperm abnormalities like a diminished sperm count and inhibited sperm motility.

The researchers additionally maintained that more research must be done before any significant conclusions can be drawn regarding molybdenum’s impact on the human reproductive system and fertility levels. However, they suggest that excessive intake should not be overlooked, especially in individuals who might possess underlying medical conditions that could produce fertility complications.