Home » How Vaping Can Harm Your Fertility

As more and more evidence emerges about the dangers of vaping (e-cigarettes), new information indicates that there is also an adverse connection between vaping and fertility.

According to disturbing studies published in the Journal of the Endocrine Society, not only can vaping affect your odds of getting pregnant, but it can potentially harm your baby if you do get pregnant.

Here’s what you need to know about how vaping can affect your fertility:

The Flavorings are Harmful

E-cigarette manufacturers add flavorings to their products to make them seem appealing and safe. However, the flavorings alone, without nicotine, can release toxic compounds including formaldehyde, acetaldehyde, and acrolein. These chemicals could harm the function of the testicles.

In particular, cinnamon flavoring slows sperm down and bubblegum flavor kills off the cells within the testicles that manufacture sperm.

It’s Not Safe to Vape During Pregnancy

E-cigarettes are marketed as a healthy alternative to regular cigarettes. This may lead some women to think e-cigs are safer and that they can smoke them during pregnancy. This is a myth. Vaping still exposes the unborn child to nicotine, which is a poison and unregulated in e-cigarette products. It directly harms fetuses by causing abnormal brain, lung, heart, nervous system, and immune system development.

In studies with mice (which are biologically similar to humans), researchers from determined that fetuses exposed to vaping failed to gain as much weight at the eight-and-a-half month mark as their smoke-free counterparts.

Other vaping risks include preterm delivery, stillbirth, or birth defects.

Second-hand e-cig smoke should also be avoided during pregnancy, since it carries the same risks as smoke that is inhaled directly.

It Can Interfere With Your Ability to Get Pregnant

Women who are exposed to e-cig vapor take significantly longer to get pregnant than those who aren’t. They are also less likely to have an embryo implant in the uterus. Implantation is the first stage of pregnancy when the embryo adheres to the wall of the uterus, also called the placenta, and starts getting nutrients and oxygen from the mother. It is essential to becoming pregnant.

The uterus’ wall can be jeopardized, and, in turn, so can the possibility of pregnancy, from vaping.

The Dangerous Interplay Between Vaping and Fertility Can Harm Sperm 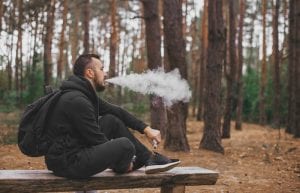 Vaping decreases the concentration of sperm and affects the organisms’ swimming ability. When sperm can’t swim correctly, they may be too slow to reach the egg and fertilize it. In addition, vaping can deform sperm, which will also impair their ability to swim to the egg. Sperm damaged by vaping can also develop weak tails. A sperm with a weak tail will be unable to propel itself through the egg’s surface.

Vaping can also cause malformation of the acrosome, or the sperm’s enzyme-filled head. This area must be activated at a specific time to soften the egg’s surface, allowing the sperm to bind to it. This allows the genetic material in the head to enter the egg and fertilize it. If the acrosome is blocked or if the enzymes are released too soon, the sperm will become completely ineffective.

It Can Cause Erectile Dysfunction

Toxic chemicals in e-cigs can affect a man’s ability to get an erection, which is known as erectile dysfunction or ED. These chemicals can damage blood vessels, narrowing them and restricting blood flow to the penis. In turn, this makes it difficult to get or maintain an erection that’s firm enough to have sexual intercourse, rendering pregnancy impossible.

Vaping negatively affects egg quality, which decreases a woman’s chances of getting pregnant. Women who vape have lower estrogen levels and go through menopause at a much earlier age than those who don’t. This diminishes the window of opportunity for a pregnancy to occur.

E-cigarettes may taste good and look hip, but there’s a dangerous connection between vaping and fertility. Not only do they jeopardize the chances of creating a child, but they also jeopardize that child’s health before and after birth. Nicotine and chemicals are harmful, no matter how they’re disguised.