Well over one billion people around the world have found to be infected with intestinal parasites. These cases are mostly found in the tropical areas of the world where sanitation and personal hygiene practices aren’t as well practiced. With parasites being known for causing infections, malaria and other diseases, most would assume that there is no benefit to parasites. However, a new finding could be a huge game-changer for how the world views some of these infamous microorganisms. A study has shown that a certain parasite, roundworms, can have a positive effect on a woman’s ability to conceive a child by boosting women’s fertility.

The study of 986 women in the South American country, Bolivia, was a project started by University of California, Santa Barbara anthropologist, Aaron Blackwell, and began in 2002 and went on for nine years. Over the course of these nine years, the nearly 1,000 Tsimane indigenous women of Bolivia were studied. The conclusion presented was that those who were found to be infected the roundworm, Ascaris lumbricoides, had two more children in their lifetime on average, than those who were not infected with the parasite. These Tsimane women in Bolivia have an average family size of nine children, with 70 percent having a parasitic worm infection.

Researchers, along with Prof. Blackwell, believe that this is due to the parasite’s effect on the immune system, helping the woman’s ability to prepare for and carry the fetus.

“We think the effects we see are probably due to these infections altering women’s immune systems, such that they become more or less friendly towards a pregnancy,” said Prof. Blackwell. Roundworms can mimic some of the same immune changes that occur during pregnancy, like stimulating T-cell production and causing an anti-inflammatory response.

Professor Allan Pacey, a University of Sheffield fertility scientist, called the study surprising and intriguing, as he has previously given drugs to women in order to alter their immune systems as a part of an in vitro fertilization (IVF) treatment process. Also, by altering the immune system, roundworms may boost conception and implantation of an embryo into the uterine lining.

Because of the roundworm’s effect on immune system, it has also been used as an experimental treatment in Crohn’s disease, allergies, asthma, autoimmune diseases and multiple sclerosis (MS). 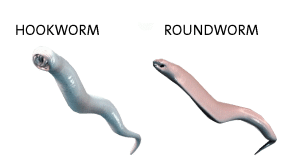 Another difference between the two parasites is the way that they invade their hosts. Roundworms typically stay in the small intestine and swipe a small portion of their host’s food, while hookworms (Ancylostoma duodenale and Necator americanus) act similar to mosquitoes, puncturing the lining of the intestine and drinking the host’s blood along with its nutrients. The study further showed that out of the nearly 1,000 women used in the study, those carrying hookworms had a smaller body mass index and lower levels of hemoglobin.

Also, the hookworms increased the age when the women gave birth to their first child and increased the amount of time between pregnancies. Professor Rick Maizels, a parasitic worm specialist, spoke to BBC News about the effect of infertility on the lives of the women saying, “It’s horrifying that the hookworm effects are so profound, half of women by 26 or 28 have yet to fall pregnant and that’s a huge effect on life.” Prof. Maiziels also believes that the hookworms caused anemia, which could have led to the infertility that the women faced.

Whether or not roundworms will be used as a treatment for women’s fertility problems or not is yet to be determined due to the amount of risks associated with using parasites. When asked about their use in future therapies, Prof. Blackwell referred to using roundworms as a fertility treatment as an “intriguing possibility,” but advised more work and research should be done before anyone tried it out on their own.