Home » Understanding a Septate Uterus and the Increased Risk for Miscarriage

A number of conditions can impact the outcome of the conception journey, and uterine anomalies are one of the rare conditions, occurring in four to five percent of all women.

When in the mother’s womb, the uterus develops as two separate halves that ultimately fuse together prior to birth. When a woman’s uterus develops differently, it is called a uterine anomaly. While there are a number of uterine anomalies that can occur, one in particular is known as a septate uterus, also referred to as a uterine septum.

Although a septate uterus is rare, it is one of the more common uterine anomalies, accounting for approximately 35 to 90 percent of congenital uterine irregularities.

What is a Septate Uterus 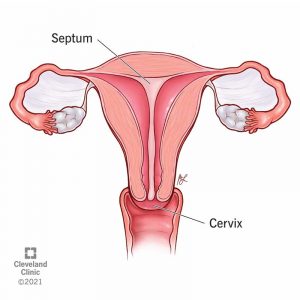 For those who are unaware, a septate uterus is an occurrence where a woman’s uterus is split in two, more specifically; it is a congenital anomaly found in a normal shaped uterus where the two halves of the forming uterus don’t fuse together and the uterus is divided with a wall of tissue membrane which creates two cavities. This membrane is called the septum and can vary in thickness and length, typically starting at the top of the uterus and extending to the cervix (bottom of the uterus) and occasionally to the vagina. While this can come with a slew of risks and concerns regarding fertility and pregnancy, such as premature labor, breech positions, or a need for cesarean (C-section) delivery, one risk in particular is that of an increased risk for miscarriage. One study found that the rate of miscarriage in people with a septate uterus to be about 35 percent, while the miscarriage rate in people with a regular-shaped uterus was about 10 to 20 percent.

Although this condition sounds monumental when it comes to fertility planning, women with a septate uterus often have regular menstrual periods, average pregnancy rates, and are not at risk of any long-term health complications. Though periods in some cases may be more painful and an increased risk of pregnancy loss is common, most women are unaware of the presence of a septate uterus and the condition often goes undiagnosed until multiple pregnancy losses occur.

How a Septate Uterus Can Increase Miscarriage Risk

While the presence of a septate uterus does not typically affect a woman’s ability to conceive, and a healthy pregnancy is possible even with a septate uterus, it does increase the risk of a miscarriage.

There are a number of conditions or occurrences that are associated with a septate uterus that can lead to an increased risk of miscarriage.

1. Untimely Opening of the Cervix

Typically, before and during pregnancy, the cervix remains closed at the lower end as pregnancy progresses, it thins and begins opening before childbirth. An incompetent cervix, also known as cervical insufficiency, is when the cervix opens too early during pregnancy.

The presence of the septum near the opening to the cervix, or the opening of the birth canal can reduce the muscle resistance in the uterus, which interferes with the closing and dilatation process. If the cervix opens too early or closes at the wrong time due to a septum presence, a miscarriage can occur. The cause of the untimely opening of the cervix is unknown. It may be that the uterus could have been injured in a previous delivery or that uterine abnormality such as septate uterus is present.

If a doctor thinks a woman may be at risk for early opening or irregular closing of the cervix, a pre-pregnancy sonogram may be requested to look for any anatomical problems.

Some women are born with a smaller size for their uterus, causing the walls to be thinner or thicker than usual. If there is less than adequate space and the amount of amniotic fluid is less, there is a higher risk of miscarriage when a baby grows inside the uterus. Within the second trimester, a smaller uterus can usually pose a higher risk of leading to a miscarriage.

In the case of the septate uterus, the amniotic fluid may not be able to form because there are not enough vessels at the uterus end to contain it. In this situation the fetus is unable to form correctly due to small blood vessels surrounding the cervix and cannot form appropriately without creating too much pressure on that part of the body.

During a normal pregnancy, the body produces a suitable level of certain hormones that help to regulate blood flow. A health fetus depends on adequate blood vessel nourishment for development. If some vessels are incapable of doing their job correctly, there can be a lack of blood flow that prevents enough oxygen to be delivered to the placenta and fetus, which may lead to placental insufficiency.

The septum, unlike the endometrium, or uterine lining, does not have adequate blood supply to sustain an embryo, instead it is merely a fibrous tissue between uterine cavities. Thus, its presence may intervene if a fertilized embryo implant upon it. If this occurs, an increased chance for pregnancy loss can occur due to the likelihood that the embryo would not implant properly, nor would it receive the nutritional blood supply necessary to develop.

As previously mentioned, a septate uterus typically is accompanied by no noticeable side effects and therefore goes undiagnosed until multiple miscarriages occur. Once this occur doctors may use a number of approaches to determine the cause of the recurrent miscarriages.

While a pelvic exam may indicate a complete septate uterus, in which the septum runs the entire length of the uterus and includes the cervix, most do not extend to the cervix and are thus not discovered from a routine exam.

Investigation into the cause of the multiple miscarriages can be done with either an ultrasound or magnetic resonance imaging (MRI) scan, a hysterosalpingogram (HSG), or hysteroscopy.

While these are the most effective tests for identifying a septate uterus, this condition can still sometimes be misdiagnosed as a bicornuate uterus, also known as a “heart-shaped uterus.”

If multiple miscarriages have occurred due to the septate uterus, the septum can be removed with a surgical procedure called a metroplasty which is carried out with a hysteroscopy, thus also referred to as a hysteroscopic metroplasty.

The procedure is minimally invasive, and can take as little as one hour in duration with no need for overnight hospital stay. During the procedure the uterus is enlarged by being filled with a saline fluid. The doctor then uses small surgical scissors through the vagina to trim away the septum. By removing the septum, the uterus can have a better environment for an embryo to implant and grow.

While the main complication of a septate uterus is an increased risk of miscarriage, a septate uterus diagnosis is not a end-all for a successful pregnancy, and surgery can significantly increase the probability of having a healthy and happy baby.