Home » Uterine Factor Infertility: How Abnormalities May Impact Your Fertility

Uterine factor infertility is a term that includes a variety of anatomical defects that affect the uterus and can inhibit a woman’s ability to have children.

The female reproductive system encompasses a complex system of organs and hormones that allow for the fertilization, implantation and development of an egg. If any component of the system breaks down, it may cause conception to become more difficult. Fortunately, there are often options for medical intervention to improve one’s chances of achieving pregnancy, depending on the type and severity of the underlying issue.

A Brief Review of the Female Reproductive System

Before examining what can go wrong with the process of conceiving and carrying a fetus, it is important to understand the underlying mechanisms. The menstrual cycle is driven by changes in the levels of certain hormones that occur in a roughly 28-day cycle. These hormones are follicle-stimulating hormone (FSH), luteinizing hormone (LH), estrogen and progesterone. FSH levels rise a small amount as menstrual bleeding occurs, which causes eggs to begin to develop. Each egg develops within a compartment within the ovary called a follicle. The follicle produces estrogen as the egg develops. During ovulation, there is a dramatic increase in the levels of FSH and LH, triggering the release of the egg into the fallopian tube. The levels of progesterone and estrogen then increase, causing the lining of the uterus to thicken. If the egg has been fertilized, it will implant into the thickened uterine wall to continue its development.

One form of uterine factor infertility occurs when scar tissue builds up in the uterus. This is known as Asherman syndrome. This can occur due to past surgery performed on the uterus or as the result of a prior infection. The location and amount of scar tissue will determine the severity of the symptoms, which can include miscarriages or a reduction in menstruation. 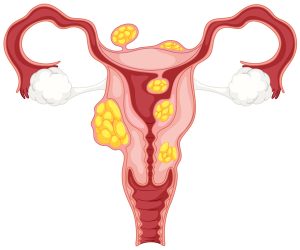 Uterine factor infertility can also result from the formation of fibroids. Fibroids are usually harmless tumors that form in the wall of the uterus. While they can become cancerous, this is relatively rare. A woman might not even notice the presence of fibroids if they are small and do not impede other structures in the reproductive system. Fibroids can affect the positioning of the baby within the uterus if they are large and obstructive, which can cause difficulty during labor and delivery. Often this can be remedied by delivering the baby via caesarian section. Fibroids can cause more serious problems if they impact the formation or structure of the placenta, which can cause miscarriages.

Sometimes a woman’s uterus develops in an abnormal way during infancy. These are called congenital defects or anomalies and affect as many as one in twenty women, many of whom do not even know they have an abnormality until they attempt to have children. Congenital defects are often asymptomatic, but can cause uterine factor infertility if severe. There are several types of uterine anomalies, most resulting from the same phenomenon during embryonic development. The uterus starts out as two separate tubes that fuse together in the fetus. Normally, this occurs as the wall between the two tubes dissipates. If this wall partially or completely fails to dissipate, problems can occur. If most of the wall is still present, it is called a septate uterus. If the wall is still completely intact, it is called a bicornuate uterus. These generally have a heart-like shape and two distinct uterine cavities. If the wall is still intact and only one half of the uterus fully develops, it is called a unicornuate uterus.

Medical professionals have a variety of specialized tools at their disposal to diagnose uterine factor infertility and improve one’s chances of becoming pregnant.

Aside from the transvaginal ultrasound that most are familiar with, there are specialized procedures that are designed to give a more precise picture of the inside of the uterus. The most common of these are the hysterosalpingogram (HSG) and the sonohysterogram. In the HSG test, a specialized dye is injected into the uterus. This dye can be imaged by X-rays, and its movement through the uterus reveals its internal structure. The sonohysterogram is similar to a traditional ultrasound but uses an injection of water to enhance the quality of the image.

Treatments for this type of uterine condition to preserve fertility generally involve surgery to remove tissue or reshape the uterus. In the case of uterine fibroids and Asherman syndrome, the obstructive tissue may be removed if it poses a problem and it is safe to do so. Congenital uterine anomalies may be fixed through a process called metroplasty, intended to restore the uterus to a more conventional shape.

The odds of successful treatment can be highly variable, and it is best to consult an expert to get a realistic idea of available options.