Home » The Impact of Endometriosis on Egg Quality

A potentially serious disease known as endometriosis can impact a woman’s reproductive organs and ultimately lead to fertility problems. While normal fertility-hindering effects occur due to physical presence of inflammation, physical distorts and scarring or adhesions that can prevent fertilization from taking place, egg quality can also be jeopardized as a result.

Not only can endometriosis impact infertility, it can also impact the ability to maintain a pregnancy and lead to not being able to carry a pregnancy to full term. However, there are methods that can be employed to relieve symptoms of this condition and potentially aid in maintaining women’s fertility.

This common gynecological disorder occurs when the endometrium, the tissues that line a woman’s uterus, grow beyond that region and spreads into her reproductive organs, and in certain instances, to other areas of the body. Typically, however, the overextended endometrium remains confined to the ovaries, fallopian tubes and pelvic region.

This excess tissue functions like normal endometrium would, meaning it thickens, disintegrates and bleeds during a woman’s monthly menstrual period. However, because it is misplaced, it cannot be flushed out of her system the way normal endometrium would. The trapped tissue often involves the ovaries and precipitates a condition known as endometriomas, in which ovarian cysts form. These growths can eventually elicit irritations and scarring.

The issue of endometriosis can provoke a variety of symptoms such as; more painful than normal periods, pain experienced during intercourse, fatigue, excessive bleeding prior to and during menstrual cycles, gastrointestinal symptoms, periods that last longer than several days and discomfort when urinating and/or defecating. In addition, this malady may also be confused with numerous other reproductive and digestive problems. However, among the most significant and potentially devastating impacts of the disease is infertility.

Endometriosis is an inflammatory and estrogen-dominant condition. This primary female reproductive hormone, is believed to play a critical part in the onset of endometriosis, as the estrogen, estradiol, helps the endometrium and uterine tissue form and thicken. Women with elevated systemic concentrations of the hormone, and are more susceptible to endometrial overgrowth than woman with normal bodily levels. This is due to estrogens role in triggering inflammation and symptoms such as abdominal pain, fatigue, severe PMS, and heavy or irregular periods.

When the ovaries are scarred and/or riddled with cysts or adhesions, issues such as poor follicle development and potential ovarian rupture can occur. In addition, this can lead to an increased flow of toxins and poor circulation which can greatly interfere with the ability of the reproductive organs to produce and release healthy eggs for the fertilization process. While it was previously assumed that an egg itself is not affected by endometriosis prior to its release from the follicles, research from the University of Southampton and Princess Anne Hospital’s Complete Fertility Centre found that an egg’s ability to mature properly can actually become blocked.

“We found that fluid from the follicles of patients with endometriosis was found to block egg maturation by generating free-radical chemicals called Reactive Oxygen Species (ROS) in the egg, which damaged their DNA. This damage caused the egg not to mature, and hence it could not be fertilized,” said Dr. Simon Lane, a Research Fellow at the University of Southampton who led the study.

In addition to this research, it is believed that an increase in molecule (cytokines) production as a result of added inflammation from endometriosis can have a paralyzing effect on both the sperm and the egg, ultimately preventing the fertilization process from occuring.

Should such circumstances continue for extended durations, a woman’s fertility levels can be permanently threatened. In fact, up to 50 percent of all women with endometriosis experience some degree of fertility difficulties. 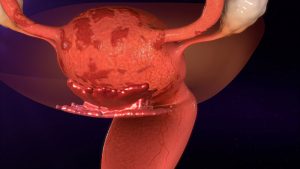 Receiving a diagnosis and beginning a treatment protocol for endometriosis is crucial to not only alleviating and/or eliminating painful associated symptoms, but perhaps more importantly in avoiding any potential fertility concerns. Because the condition can mimic other sicknesses, a doctor may initially overlook it. It is therefore critical for women experiencing any of the manifestations to request that their physicians perform tests to either confirm the diagnosis or rule it out.

Though there is no specific cure for endometrial disease, there are effective treatments designed to alleviate pain and other symptoms, limit recurrences and enable women to maintain or reestablish adequate fertility levels. Such therapeutic endeavors include:

Treatment approaches for endometriosis may include following an endometriosis-friendly diet, avoiding key pollutants and using specific food choices to help balance your hormones. The primary goal with lifestyle changes is to support the health and function of the endocrine, endometrium and immune systems overall. A nutrient- and fiber-rich diet that avoids foods known to make the condition of endometriosis worsen (wheat or gluten, red meat, dairy products, nonorganic foods and soy) is advised.

For some endometriosis cases, physicians will prescribe anti-inflammatory drugs designed to ease the pain and/or hormone therapy, for those women whose conditions are attributable to elevated estrogen levels. One or both can often be administered and may help balance hormones, minimize symptom pain, or aid in women’s ability to conceive.

Laparoscopic procedures may be necessary not only find a proper diagnosis but to also remove cysts and/or scar tissue. In the presence of more serious disease and/or significant damage, or in women unconcerned about becoming pregnant, a hysterectomy (removal of the majority of her reproductive organs) might provide a viable treatment option.