A plant known as spearmint can significantly affect female fertility hormones and help against diseases such as PCOS.

Scientifically categorized as Mentha spicata, spearmint is a popular type of mint plant used in many food and beverage recipes and in numerous healthcare and hygienic products. Somewhat similar to peppermint, the plant is favored for such uses because of its pleasant taste and aromatic quality. Spearmint is also thought to possess numerous therapeutic properties and has been widely used for medicinal purposes.

Researchers maintain that spearmint contains appreciable quantities of several important vitamins. Additionally, the plant contains discernible concentrations of antioxidants. These powerful nutrients are noted for their ability to curtail and eliminate systemic inflammation, which is often a precipitating factor for physical injuries and could lay the groundwork for serious, potentially life-threatening conditions like cardiovascular disease, immune system disorders and various types of cancer.

Studies have concluded that spearmint was proven effective in improving conditions such as memory loss and other issues associated with cognitive decline, sore throats, arthritis, minor upper respiratory ailments like the common cold, chronic fatigue, anxiety, pain relief, dental problems and digestive issues such as diarrhea.

Many people are familiar with key reproductive chemicals like estrogen and progesterone. However, there are several other vital female fertility hormones, such as follicle-stimulating hormone (FSH), luteinizing hormone (LH), estradiol and anti-Mullerian hormone. Each of these substances plays an integral role in female fertility, in addition to the development and strengthening of the female reproductive tract. Any imbalance could precipitate illness or conception struggles. 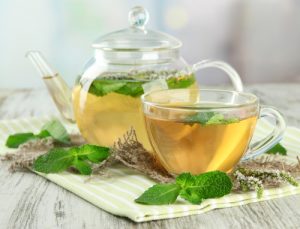 The Importance of Spearmint

Researchers have concluded that women experiencing hormonal imbalances are more likely to experience clinical improvement after ingesting spearmint. One study examined female subjects with increased systemic concentrations of the primary male reproductive hormone, testosterone. Examiners investigated more than 20 women over a five-day period and found that those who ingested spearmint witnessed a decline in testosterone levels and an increase in systemic quantities of FSH, estradiol and LH.

More compelling statistics were garnered by scientists studying the effect spearmint ingestion had on a fertility-threatening condition known as polycystic ovarian syndrome, often abbreviated as PCOS. PCOS causes women to experience prolonged or irregular menstrual cycles, a systemic buildup of male reproductive hormones called androgens and, in severe manifestations, the development of cysts in their ovaries, which impedes the normal ovulation process.

More than 40 subjects diagnosed with PCOS were administered spearmint over a 20-day duration. These examinees witnessed a decline in systemic androgen concentrations and a discernible increase in female fertility hormones, such as FSH and LH. Examinees given placebos experienced no discernible alteration in their condition.

Fortunately, obtaining and ingesting spearmint is not a significant chore for those who need to boost systemic concentrations of female fertility hormones. Arguably, the simplest way to accomplish this task is by consuming herbal tea containing spearmint. Test subjects who enjoyed clinical improvement in the aforementioned studies were administered this beverage. Spearmint tea is readily available for purchase online and at a variety of well-known pharmacy and supermarket chains. Additionally, spearmint can be grown in a garden and can be included as an ingredient in a variety of recipes.