You may have heard of a new way of improving fertility through the use of saw palmetto, a small palm tree found in Florida and other southeastern states.

Certain Native American tribes in these states have used the berry from this tree to treat a wide variety of ailments. The most notable of these being as a panacea for urinary and reproductive problems. In recent years, this use for the little tree has become a hot topic when it comes to treating the symptoms of an enlarged prostate. Although the popularity of this plant comes mostly from Europe, it has also started to gain a small following in the United States.

The Benefits of Saw Palmetto

Saw palmetto has a variety of uses. Depending on whom you ask, you’ll also get a wide variety of answers. Most people that you ask, however, will tell you that this plant is a solution to certain types of reproductive system problems such as low sperm count or pelvic congestion. Recently, however, it has started to gain traction as a way to improve fertility for both men and women.

Some alternative medicine followers also find this herb to be a great remedy for people with high stress, poor lifestyle and unhealthy dietary habits. Some people even believe it can help fight against hair loss.

The Way It Works and How It Helps 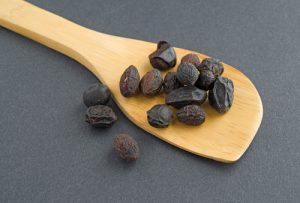 Saw palmetto primarily works by stopping the breakdown of testosterone. This lets the body hold on to more of its testosterone while simultaneously preventing the creation of dihydrotestosterone. In men, this combination results in the prostate gland being forced to halt its growth—a natural process that can sometimes have unwanted side effects.

Examples of some of these side effects of an enlarged prostate include:

Preventing the breakdown of testosterone, however, also comes with another benefit that also affects women as well as many men.

Due to its effect on male hormones, some findings have shown that saw palmetto may be able support the balancing of hormone levels in women with PCOS.

This herb, however, isn’t a quick cure that will work instantaneously.

Saw palmetto isn’t going to improve someone’s fertility overnight. It’s the type that will take quite a while to start being effective—think months, not weeks. Although some results could be seen in just over a month, the best results may only start to happen many months down the line. Many proponents of the herb recommend stopping use of the herb after half a year in order to check how well the body can function without aid.

The actual part of the plant that is being ingested is the berry. As it contains a wide variety of chemical compounds, not everyone will react positively to its use.

The Bad Side of the Berry

Millions of people take saw palmetto without a problem. A small number, however, aren’t so lucky. These unlucky few may experience a host of side effects that could include headaches, nausea and diarrhea. Others may even experience dizziness or vomiting. As research of this plant is still ongoing, it may be a good idea for anyone at risk of ailments, such as pregnant or breastfeeding women, to avoid it.

Likewise, certain medications may also have negative interactions with the herb. Medications that slow blood clotting, for example, may result in an increase in bruising or bleeding.

Saw palmetto isn’t new. It’s been around for many years and has even been used by certain Native American tribes in the Americas. Nowadays, millions of men and women around the world are regular users of this little berry. Although its use may not be the right fit for everyone, many others swear by its use in improving fertility.