Finding out you have cancer can be one of the scariest and most uncertain times in a woman’s life. Of course, a woman’s first priority is to get healthy and cancer free as quickly as possible, but a woman’s mind also turns toward the future. Most cancer treatment options, like chemotherapy and radiation, can damage a woman’s eggs, which in turn, can affect her fertility. A new study, revealed in the Human Reproduction journal, may give hope to young women faced with the battle of cancer treatment and infertility. Performed for at least a decade, ovarian tissue transplant surgery is showing signs of having a high success rate for women becoming pregnant after receiving a transplant. 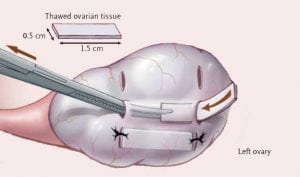 The procedure for ovarian tissue transplants is really quite simple. Prior to the start of cancer treatment, women elect to have one of two healthy ovaries removed. This is done as an outpatient surgery through a tiny, laparoscopic incision in the abdomen. The ovary is removed, sliced into 25 small slivers, and frozen. After the woman’s cancer treatments are complete, the small pieces of the ovary are thawed and inserted back into the body. The frozen pieces are then either implanted into the remaining ovary or along the abdomen wall. Because the tissue of the ovary acts much the same way a skin graft does, the blood vessels reconnect on their own between two and 10 days. Women then can conceive naturally or through In Vitro Fertilization (IVF).

A recent study performed by a team of doctors in Denmark explored the success rate of conception for women who have undergone one, or several, ovarian tissue transplants. They studied a total of 41 women around the world who combined had 53 transplants over the course of 10 years. They found that of these women, 32 wanted to become pregnant. Of the 32 women, 10 successfully became pregnant with 14 healthy babies. There were also three other successful conceptions, with one ending in a miscarriage and two resulted in an abortion. While many other doctors had concerns about implanting potentially cancerous cells back into a healthy body, there was not one reported case of the woman’s cancer returning.

So who is eligible for a transplant? It seems just about everyone, and it poses a better and cheaper option than harvesting and freezing a woman’s eggs, as is the case for IVF. This is a very common procedure in Denmark for women who are about to start their cancer treatment. Nurse specialist Grete Brauten-Smith would like this treatment to be an option for any woman with cancer. “Chemotherapy treatment can cause infertility—a massive worry for thousands of younger women with breast cancer. So it is very encouraging to see these improving success rates for freezing ovarian tissue,” she explains. She is an advocate for all women to have the option to talk to a fertility doctor before treatment so they can better understand their options.

There are several benefits to undergoing a tissue transplant. For one, the ease of the surgery makes it possible for women to preserve their fertility and receive cancer treatment as soon as possible. With the quick laparoscopic, outpatient procedure, a woman is out of surgery in about an hour and can begin treatment for cancer in one to three days. Compare this to harvesting a woman’s eggs which would need to be collected through about three cycles for a reasonably high chance of future pregnancy. This would take a great deal of time longer and delay cancer treatment between eight and nine months. The ability to transplant the tissue directly into a functioning ovary makes natural conception a possible reality that helps couples avoid the costly and potentially stressful ordeals of IVF. 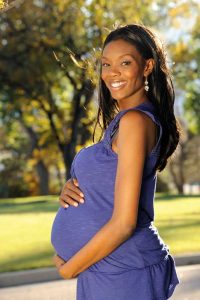 There are even more possibilities that this study can present in the future. With successful pregnancies following a transplant, doctors are exploring the success rates of young girls who may be a potential candidate for this surgery. Because a woman is born with the total amount of eggs in her ovaries that she will contain for her lifetime, doctors are finding this procedure just as successful for young girls who have had to undergo cancer treatment before puberty. This still gives the girls a chance to have a family after they are healthy and cancer free. This new study also opens the possibility for women to still conceive a child, even if they want to wait until later in life. If a woman has her tissue frozen in her 20s, it is entirely possible to have the same 20-year-old ovary tissue transplanted into a much older body.