Home » Our Fertility Journey; 6 Years in the Waiting

It’s such a roller coaster emotionally and physically. Your hope comes rising up with each new month for an opportunity to get pregnant, and it builds as the month goes on with each little symptom you feel, no matter how old or new it is. However, there is nothing that can prepare you for the hurt that comes flooding back the day you are aware that yet again, you are not pregnant.

Our fertility journey started about a year and a half into our marriage, when we thought why don’t we ‘not try, but not avoid’, you know what I’m talking about. You’ll just wait to see what happens, let things run their own course. The first few months went by and I never gave it much thought, we were young, healthy, our parents never had any problems. After a while I started to get worried. What was wrong? What were we missing? Was there some trick everyone else knew that I had missed? Did my painful periods have anything to do with my fertility? Should we get help?

I ended up booking a doctor’s appointment, just to make sure things were in check. It was a short visit, cause they told me that they don’t do anything to help couples with fertility until at least one year of trying. So, I went home thinking it must just take longer for some people and started doing some research. I was eating healthy, taking all the right supplements, doing all the right moves. What the heck could be wrong? After a year had gone by I went back to the doctor and this time they did some blood work, told me that my thyroid and estrogen look good and I really had nothing to worry about. I was so frustrated that no one wanted to help us! 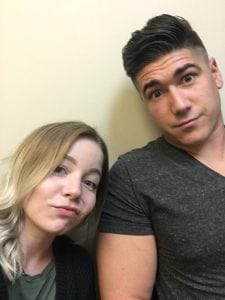 Our First Appt with Fertility Care

I had to work for myself to get an appointment into a gynecologist. Who was nice enough to refer us to the fertility clinic at the London Hospital, after telling me that he did not believe I had ENDO. From there things only got more interesting, and each time something new was found we felt like that was it, that’s what has been wrong this whole time, lets fix it and we can have our baby! Man have I been wrong about that! Each time something new is found, a new therapy or treatment is introduced, it feels like starting over. It feels like we have started ‘trying’ about six times now.

The fertility clinic did some more testing, told me that my Anti-Mullarian Hormone (egg reserve) was on the low side of normal, and some male factor infertility. She first recommended that we do IVF, and my heart sank, I did not want to jump into that! Surely there could be more to search out, other things to try first? So, we started to see a very credible Chinese doctor who did really help my husband! So much so, the fertility clinic after another sperm test said we could start with IUI instead. With everything in place for us to proceed with our first IUI, we were informed that because we were travelling to another country for my brother in laws wedding we would not be able to do the treatment for another six months. Talk about getting somewhere just to be shut down, obviously I was heartbroken, I even thought about staying home! 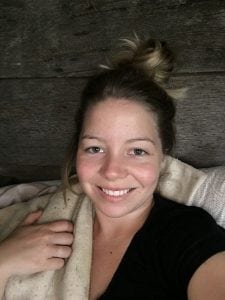 Home after my surgery July 2017 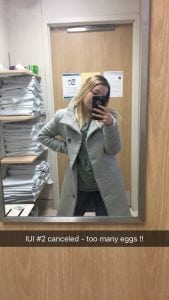 In the meantime, my periods were getting worse, and while we were on our little vacay I had a family member come to me concerned about how painful my periods were. She told me all about the doctor she saw who helped her get pregnant after her IUI failed. I did some research and was so surprised to see that they treated PMS as a symptom for Infertility! With six months to wait for an IUI, I called to get in and see this lady. This was the first time I thought like I was actually getting somewhere, real answers. We discovered that I basically had no progesterone, my thyroid, B12, Iron and estrogen were all too low in order to get pregnant. She helped me balance these out, and get my husband looked at as well. After about six months we still weren’t pregnant. With all our levels looking as they should, I was referred to have a laser laparoscopy, which meant no IUIs or trying to get pregnant for a few months. This was a surgery to confirm and remove as much Endometriosis as they could, and to inspect to make sure everything looks good for fertility (which it did!).

Of course, after my surgery I thought this would be my peak time for fertility! It completely changed my periods for the good (for now) but now I was not ovulating. I was put onto Femera to increase ovulation and told about the risks of the increased change of multiples…four months later… still nothing.

I have been on Femera for about six months dropping one, two, three or four eggs each month. Still with the doctor who has been helping us thus far, but we have also started fertility treatments. We completed one IUI cycle in February which failed. Our second was cancelled to do the releasing of too many eggs (they do not want to inseminate if there is a risk of more than two babies), and our third is happening within the next week! 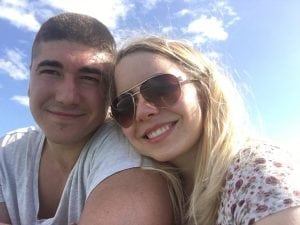 As husband and wife, we have been married for seven years, this trial in our life has thankfully brought us so much closer together. We try not to let these things define us but are aware that it takes up most of our thoughts throughout the days. We are solely committed to each other, aware that our children will grow up and leave home and we will always have each other. This is a season in our lives were God has shown us so much closeness, to each other and to Him. This season is long and we are dedicated to doing a few IUIs and if it comes to it IVF. We are excited to see what God has in store for this year. If you are struggling with infertility, whether it’s been three months, two years or ten years, just know you’re not alone! Infertility does not define you and having infertility does NOT mean you will not be a mother! Take each day step by step, find support where and when you need it and do whatever you feel you need to do. & don’t forget to believe!

Samantha Wright is currently living in the outskirts of Woodstock Ontario with her husband, and two long haired german shepherds. She is a certified holistic nutritionist and has traveled to BC for a Certificate in Colon Hydrotherapy, Manitoba for a Certificate in Sho-Tai, and has 6+ years experience in a health food store. She loves creating delicious recipes, finding delicious healthy and organic food, sharing exciting health information, singing, working out and taking care of her family.

Blessed is she who BELIEVED that the Lord would fulfill His promises to her. – Luke 1:45