Home » Relief Found in Opening Up About TTC Journey

I would say we started trying for a baby when we got engaged in May 2015. I never took any contraception because it affected my weight and made my acne worse, but we were careful, although we both knew we wanted children.

When we got married in February 2017 and still hadn’t fallen pregnant, we knew something was wrong. We went to the GP’s in August 2017 who referred us to an infertility clinic and they asked my husband, Greg, to do a specimen sample in the mean time. Luckily Greg’s sample came back okay. On Sunday, October 19, we were sitting in the waiting area of the infertility clinic at 9 a.m., waiting to be seen by the doctor.

The nurse saw us first and asked us routine questions, took a urine sample from both of us, did my blood work and then we were seen by the doctor. He went through more questions and said he would see us again in three months. During these three months I had blood work done during my next period (days 2-5 and day 21), an ultrasound scan, a hysterosalpingogram, I needed to lose weight (the doctor wanted me below 75 kilograms/165 pounds) and I had to commence Pregnacare vitamins.

I got a letter about my blood results first. They said all was normal but my prolactin levels were very high and I would need a Brain MRI. I did look online and had convinced myself I had Prolactinoma (a tumor on the prolactin gland which sits at the base of your skull). I had my MRI but wouldn’t get my results until I saw Dr. Mahmood again.

My hysterosalpingogram (HSG) had to be abandoned due the pain and discomfort I felt during the procedure. A lot of women I have spoken to said they experienced no problems and if their tubes were blocked, they would be able to be unblocked so I wasn’t so nervous when I went in. It was the Infertility Nurse Specialist who did the procedure. During the procedure, she said that my cervix was raw and I had fresh blood. She asked my about my smears and said I need to make sure they are up to date. After the procedure she said she would speak to the doctor who will probably put me on the waiting list for a laparoscopy and dye test. I went straight to my GP after the HSG and asked about my smear, which was done January 2017 and isn’t due again until January 2020, (my last one was normal).

Next, I had my ultrasound, during which, they said my right ovary was fine, my left looked polycystic and my uterus was normal, but I would get official results at my next appointment. This did come as a relief as I already knew that I had polycystic ovaries (something I was scanned for back in 2010). 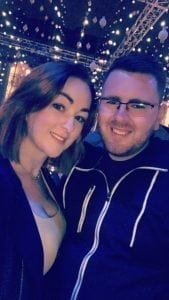 On February 21 of this year (2018), I was back at the hospital waiting to see Dr. Mahmood. Before I saw the doctor, an auxiliary nurse weighed me and to my surprise I had lost an extra 1 kilogram/2 pounds. The doctor called us in and we went through all of my results. He said my blood tests that I had gotten done during my period showed that my progesterone was 21.9- which means I am likely producing eggs. My ultrasound showed possible polycystic ovaries on my left ovary and a cyst (not polycystic) on my right ovary, which is normal, and is nothing for me to worry about. My MRI was normal but he didn’t say why my prolactin levels were so high. I didn’t ask why they were high either, I was just glad that it came back okay after convincing myself that I had Prolactinoma.

At this point, Dr. Mahmood is happy with my weight loss but still wants me under 75 kilograms/165 pounds and I aim to be below that the next time I see him. He has put me on the waiting list for a laparoscopy and dye test. This will be my next step, which I will hopefully have done in six to eight weeks, then I will see him again in the clinic.

During this time I will continue to try and lose weight and try and keep as positive as I can.

Jillian Lithgow and her husband have been trying for a baby for three years now. It has had an emotional impact on her, and one night she decided to start sharing her journey in a blog to raise awareness about infertility in men and women. Prior to beginning her blog, she had only told close friends and family that they were trying to conceive but upon sharing her first blog, she shares that she “can’t explain the relief” she felt.

It’s not an easy journey to be on and it’s difficult to stay focused, but I can’t emphasize enough about how good it felt to open up about my story. Infertility has a massive impact on so many people and even though our paths may not have the same obstacles, the destination is the same.