Home » Is Pollution Contributing to Your Infertility?

Having difficulty getting pregnant when you’re trying can be heartbreaking. Is it possible that pollution is the cause of your infertility?

This is a fair thing to wonder. After all, pollution considerably mars the quality of air due to the presence of toxic, harmful substances. It is widely known that fossil fuels, smog and mercury, among other things, permeate the air and lead to a slew of health problems. Scientists have performed studies that show that too much exposure to air pollution can contribute to a wide range of problems related to your health, including reproduction.

Pollution and Its Effect on Female Infertility

Women have what is known as an ovarian reserve. Generally speaking, this relates to the number of eggs a woman’s ovaries carry throughout her reproductive years. A study performed in Italy between 2007 and 2017 examined the hormones of female participants. They looked at the relationship between reproductive health and pollutants in the environment. The scientists learned that the chemicals present in the air and those in artificial ingredients in people’s everyday diets have a direct role in disrupting hormonal balance.

It was also discovered that the main hormone that is particularly at risk is the anti-Mullerian hormone, also known as AMH. This is a hormone that is secreted by cells in a woman’s ovaries and is essential in terms of ovarian reserve. While other factors such as smoking, age and diet can adversely affect AMH levels, further studies are needed to investigate the way environmental factors affect it.

The Italian study examined ovarian reserve after exposure to pollution in 1,300 women. The scientists looked at 1,463 AMH samples from the participants and saw that AMH levels in those older than 25 were changed based on age. At the same time, they found that chemicals found in the environment contributed to the changed levels.

The scientists ultimately concluded that lower levels of AMH were a result of participants’ exposure to pollutants, particularly PM 10, PM2.5 and NO2 levels. It was noted that women who live in areas with high air pollution have a significantly lower ovarian reserve. 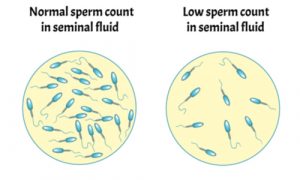 When it comes to men’s fertility, the most important aspects are the quality and quantity of sperm. A sperm count that is too low can lead to infertility problems when a man is trying to get his female partner pregnant. Around 20 percent of all couples who have difficulty conceiving learn that the man’s reproductive health is the issue.

The big difference between men and women is that unlike women, men produce sperm throughout their lifetime. A woman has every egg she will ever have when she’s born and eventually, the supply runs out. When men are exposed to the harmful chemicals that make up air pollution, the quality of their sperm is adversely affected.

Men who live in areas with particularly high traffic concentration are more likely to have deformities in their sperm. This can result in infertility. Research performed in Taiwan determined that air pollution can negatively impact the quality of a man’s sperm and prevent conception, and other studies have found that air pollution can negatively impact men’s sperm motility.

It’s already known that areas with heavy air pollution can lead to adverse health problems like lung disease and heart problems. The levels of ozone are even higher during the summer thanks to a combination of emissions spread into the air through machinery when the sun is hottest. According to a doctor from Pennsylvania State University College of Medicine, it’s best that women avoid these areas, especially when they are trying to get pregnant as their ovulation can be disrupted.

Water and Your Fertility

Another study was done involving the chemicals in water and their potential effect on fertility. The University of Exeter and the Centre for Ecology and Hydrology, located in the United Kingdom, studied chemicals in the water that blocked testosterone and uncovered shocking results. The chemicals included anti-androgens, which actually inhibit testosterone, and the researchers saw that some male fish changed genders due to excess estrogen in the water.

Another study, performed in 2014 in China, discovered that men who were constantly exposed to chlorinated water had fewer sperm. The sperm they did produce was also of lesser quality and had lower motility.

These statistics show that pollution can adversely affect your fertility. If you are regularly exposed to high pollution content, you can only benefit from consulting with a fertility specialist.