Home » Far From Giving Up – A Fertility Journey

I really wasn’t sure where to start with telling my story, but I know I want to be open and honest in the hope that more women will feel empowered to share theirs. I think it is best to start from the beginning…

The beginning of my journey started in late 2007. I had just turned 24 years old when my husband, at that time, and I had been trying on our own for 2 years to conceive and we finally decided that it was time to seek answers and help. We paid a visit to my Gynecologist and discussed the possibility of endometriosis due to the severity of my menstrual cramps. He recommended we do a Laparoscopy with HSG. I went into the procedure excited because I thought, “He’s going to get in there, see that everything is fine, and we’ll move on to the next steps.” Boy was I wrong. I awoke from the procedure to a husband in tears, holding my hand, and the doctor and my mother standing next to him. My husband explained that there was very little endometriosis and that they were able to get rid of what was there. This was the good news. However, my right tube was completely closed off and filled with fluid while the left was only slightly open. I asked if there were any options in reversing it and I was told the success rate is far too low and that IVF was our only option. I broke down in tears and I can honestly say, have never fully recovered from receiving this news. It created a large void in my heart, that I’m not sure will ever be fully healed. I was shattered.

Come December that year, my Gynecologist brought us in to the office to explain that he would be putting us in better hands. He had received word that IVF of Michigan was participating in a study for a new progesterone ring and half of 1 IVF cycle would be covered. This was our chance! We again were very excited at the possibility of this being it. We knew based on experiences by friends that this was no guarantee, but we were convinced that my age was on our side. Our IVF journey began in March 2008. Everything seemed to go well. My ovaries responded exceptionally well, and things were looking good for transfer. Out of my 8 eggs retrieved, 5 had fertilized and were looking perfect. On transfer day, we had two little embryos transferred. I was pregnant until proven otherwise. Two days after transfer we received a phone call from one of the nurses explaining that our 3 remaining embryos had perished. It was now all up to these strong little embryos we had transferred. Two weeks later we went in for the pregnancy test. As we sat in the office I suddenly felt a gush. I ran to the bathroom and here it was, my worst fear. We still took the pregnancy test but after 4 days of bleeding, I knew inevitably that I was not pregnant. The nurse called and said my HCG level was only 18. She said it was likely a miscarriage or an even smaller possibility that it was chemical. I was shattered once again. Our journey had ended. In 2011 due to unrelated circumstances, we divorced. In hindsight, this was a blessing in disguise. I found my soul mate, 9 months later. A guy I had a teenage crush on in high school. We got married in 2013. 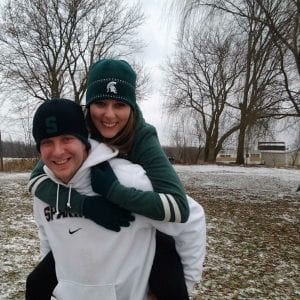 Fast forward to 2016, my current husband and I had been married for 3 wonderful years, and together for 5 equally wonderful years. We decided we were ready to grow our family and so we made a consultation appointment with The Fertility Center. They came highly recommended by friends who had success with their physicians.  We discussed my medical history, our ideas of where we would like to start, The Fertility Center’s success stories and we landed on a plan. First step was another HSG to see what state my tubes were in. This was performed by my current OBGYN, Dr. Shoenmacher. We scheduled the HSG a few days later and so our journey to baby Russell began. As I laid on the table thinking about the past and the possibility of a future, I became overwhelmed with emotions. I prayed as hard as I could and hoping: “Please let there be good news. Please let there be changes.” The “dye” went in and I was in disbelief. The screen showed that my left tube was clear and my right tube was still showing a buildup of fluid and a pinched end near my ovary. I cried happy tears because although my right tube was still an issue, I had a chance with the left. To my surprise, Dr. Shoenmacher explained that he could do a laparoscopy to drain the right tube, repair the ends of both tubes (since they were closed off for so long, they were a little damaged), and also create a new end for the right. He said this wouldn’t increase our chances by much as there is risk involved, but he was willing to take the chance and so were we. This built up so much hope. June 2016, I had my surgery and it was successful! My tubes were open and clear. Recovery was about 3 months. This sounds long but from surgery to being able to have intercourse, we wanted to be careful. Once we had the green light, we began treatment with Femara and timed intercourse. My ovaries didn’t respond well to the Femara, so we moved on to Clomid. My ovaries were responding well, but after a few failed cycles, we decided it was time to take a break from the stress and pressure of it all. We had a couple of trips coming up and thought taking the time for us was the medicine we needed and it was. We took 2017 to ourselves and it brought us closer as a couple and made us stronger as individuals.

In July of this year, 2018, we met with a new doctor, Mili Thakur, at The Fertility Center. After discussing that we wanted to try edicated cycles again before moving on to IUI, we decided to do yet another HSG to see if my tubes were still open since it has been 2 years from my surgery. We found that they are! With bloodwork completed and a laundry list of vitamins and supplements to take daily, we were off on our journey again.

We recently had our third unsuccessful cycle of Clomid and are now moving on to IUI. We will begin our first IUI cycle around October 7. We couldn’t be more excited about this next step in our journey. Our birthday is on October 11 and I couldn’t think of a better birthday gift than to begin this next step.

We have approached our journey with as much positivity as one can have and an abundance of hope and faith that our doctors will do all that they can to help us achieve our dream of growing our family.  We are optimistic and putting all our trust in Dr. Thakur’s hands. Her approach has been that of compassion for our journey thus far and providing the treatments we discussed that we would like to be part of our journey. She is guiding us with her experience and knowledge, but allowing us to make educated decisions. We couldn’t have asked for a better doctor. The journey has been a long one, but it isn’t over and I am far from giving up!

Baby dust to all! xoxo