Infertility affects an estimated 8 to 12 percent of all couples worldwide, with men being a primary or contributing factor in about half of all cases, according to published studies. The causes of male infertility are varied, but about 25 percent involve either sperm transport disorders or idiopathic factors in sperm with no apparent dysfunction. Medical professionals continue to look for ways to help couples struggling to conceive. As part of their research, scientists led by the University of Sheffield have discovered a new protein that helps sperm fuse with an egg. 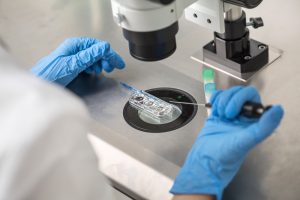 The new protein, named MAIA after the Greek goddess of motherhood, could be instrumental in helping doctors better understand some aspects of infertility and developing new treatments. In the first study of its kind, the international team of researchers, led by the University of Sheffield, created artificial eggs from thousands of beads. Each of these beads had a different piece of protein known as a peptide on its surface for sperm to attach to.

When sperm were incubated with the beads, the scientists found that only a small number of beads had sperm attached. After several painstaking rounds of removing all of the beads that had no sperm attached, the researchers were eventually left with beads that correspond to a specific protein – MAIA – and sperm attached to all of those beads. The gene corresponding to MAIA was then inserted into cultured human cells, and these became receptive to sperm just as they would during the natural fertilization process. These results indicate that MAIA is responsible during the process of attracting sperm to the ovum for fertilization. This could help confirm the theory that some sperm may not be compatible with some eggs and lead to new therapies to combat infertility.

Processes That are Essential for Successful Fertilization

Sperm cannot fertilize an egg from the start. It is an ability acquired only after fertilization, during passage through the female reproductive tract, and requires two sequential, time-sensitive processes to give sperm the physical and biochemical properties needed to perform its basic job.

The first process is called capacitation. This is the physiological maturation process of the sperm cells in the female genital tract Without this process fertilization of the egg cell is not possible. This process alters the physiology of each sperm by altering the membrane of the head to help it penetrate an egg’s hard, outer layer – the zona pellucida – and to create greater motility.

The second process is the acrosome reaction (AR), a chemical action that releases enzymes in the sperm head that further promote penetration into the zona pellucida. Acrosome reaction is the sub-step in conception that allows the sperm to penetrate to the plasma membrane of the egg. Both processes are essential for a successful fertilization of an egg cell, and the time factor is also important. In fact, premature AR has been linked to idiopathic male infertility. 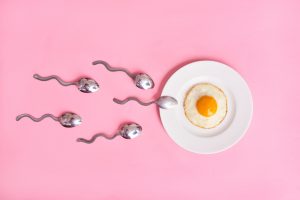 In a new article published in the journal eLife, a team of researchers from the University of California San Diego School of Medicine describes how GIV/Girdin, a ubiquitous signaling molecule, plays a crucial role in male fertility by inhibiting capacitation and AR precisely tuned to promote sperm motility and sperm survival and guarantee fertilization success. Specifically, the research team found that GIV—a member of the G protein family that serves as a molecular switch in cells that transmit and fine-tune signals—regulates the activity of enzymes that switch the processes of capacitation and AR on and off. Low GIV transcript levels in males are inevitably associated with infertility. As a result, GIV plays an essential role in male fertility and successful conception.

The Role of NELL2

Newly produced sperm in the testes have no ability to fertilize, but become fully functional as they mature in the epididymis. The development of the epididymis itself is dependent on testicular factors arriving via the luminal flow. It is believed that defective signaling between the testicles and epididymis leads to male infertility. Scientists have identified NELL2 as a testicular luminal protein that binds to its receptor ROS1 on the surface of the luminal epididymis and induces epididymal differentiation. The differentiated epididymis, in turn, secretes a protease essential for fertility, ovochymase-2, to make sperm fully mature and functional. If this important protein is missing, sperm motility is impaired, making conception impossible.