When a couple is trying to conceive, a low sperm count or low sperm mobility can make egg fertilization extremely difficult. However, promising new findings from a team of medical researchers led by Jurrien Dean may have discovered a simple, low-cost way of ensuring that the most active sperm are given the chance to reach an egg. The researchers have discovered that polymer beads can be used to capture healthy, viable sperm.

What are the Polymer Beads Made of?

These beads are created from agarose, a polysaccharide polymer material that is made from seaweed. This polymer mimics a biological surface that can grow organisms and bond to proteins, so it is often used for medical purposes. In order to be used in fertility treatments, agarose can be made into beads with a diameter of 0.037 millimeters, which is just slightly smaller than an unfertilized human egg.

How Do the Polymer Beads Capture Sperm? 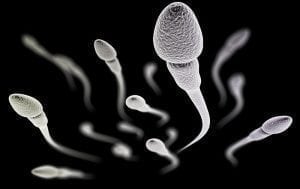 The agarose polymer beads may be used to capture sperm if they are coated in a protein that is called ZP2. ZP2 is a peptide that is normally found in the zona pellucida, which is the thick membrane coating eggs before they are fertilized and implanted in the uterus. In the natural fertilization process, sperm are attracted to ZP2 proteins, so they swim towards the egg and bind to the surface before fertilization. When the polymer beads are mixed into semen samples, all healthy sperm that is capable of binding to a human egg will temporarily bind to the beads long enough for the healthy sperm to be removed from the semen sample.

What Research has been Done with Polymer Beads?

Dean’s team of researchers tested the polymer beads capabilities with mouse eggs that expressed the ZP2 type of protein. It was discovered that the beads could be used to collect sperm and then removed from the sample. After a brief period of time, the sperm naturally released from the polymer bead. They were then mixed with eggs, and the researchers confirmed that the sperm that connected to the polymer beads had higher success rates of binding and penetrating into actual eggs. The polymer beads were also tested by being injected into the uteruses of fertile female mice, where they attracted so many sperm that the mice would not get pregnant for 10 estrous cycles. Therefore, these findings might also be used to develop new contraceptive methods.

Do These Beads have Potential as a Fertility Aid?

These agarose polymer beads may potentially be extremely useful for both intrauterine insemination and in vitro procedures. In couples struggling with fertility, one of the biggest challenges can be ensuring that sperm is able to bind to an egg and fertilize it. Removing any dead sperm or sperm with poor mobility before it is exposed to an egg greatly increases the chances of a successful fertilization. Currently, the only method of doing this is sperm washing, which is not very effective at concentrating the healthiest sperm within a sample. The temporarily reversible binding created by the protein coated polymer beads will allow fertility specialists to select sperm that can definitely bind with an egg and create a sperm sample that ought to work more effectively.

Is this Technology Being Used in Fertility Treatments Yet?

These research findings definitely have exciting implications, but unfortunately, this treatment is not yet available for humans. Though it is unlikely that agarose and PZ2 proteins would have a negative effect on a human, any revolutionary treatments like this must undergo extensive testing before they even begin using human volunteers in a medical trial. The beads are not expensive or difficult to create, so it may one day become a revolutionary fertility aid that changes the way that fertility treatments select healthy sperm to fertilize an egg.