In addition to iron and copper, the trace element zinc in the human body is crucial for various metabolic processes and cell communication. However, zinc is also essential when it comes to female fertility.

Zinc and its Role in Female Conception

Zinc is an important factor in ovulation, which means that deficiency can significantly reduce the likelihood of pregnancy. Low levels of zinc are associated with hormonal imbalance, menstrual disorders, and anovulation, factors that affect female reproductive ability adversely.

The trace element is already essential during the earliest stages of conception, namely in the first stages of cell division, after fertilization of the egg cell. In addition, it protects DNA from damage, increasing the chances of healthy fetal development. If the zinc concentration in the plasma is too low, the supply of zinc to the baby may be compromised and its growth suffers.

Ova’s Need for Zinc for Fertilization

How important is the trace element for the ova? Researchers from Northwestern University in Illinois recently found out after conducting studies on mice. They found that the maturing ova need large amounts of zinc to be fertile. In fact, they require a 50 percent increase in zinc before fertilization can occur. When the scientists measured the concentration of zinc and other minerals in the egg cells of rodents, they found that zinc levels were significantly higher than those of other major elements, such as iron and copper. Zinc was the only metal that changed significantly in concentration during the maturing process.

To further explore the role of zinc in fertility, scientists suppressed zinc uptake of ova. The result: In telophase I (a stage of meiosis), the development of the egg cell slowed down. When the concentration of zinc was artificially increased shortly before this stage, the ovum could continue to develop normally. The researchers explain the study results as follows, “It’s touch and go whether an egg cell will die or develop into a fertile cell. Zinc seems to be a key factor in healthy egg cell development.” 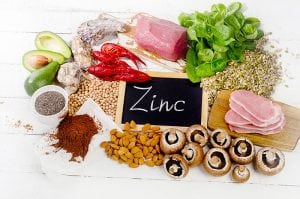 Scientists and fertility specialists have long been trying to figure out what makes a good ovum that will produce a healthy embryo. This is especially important in terms of fertility treatments when physicians have to decide which ova to use. According to researchers, this is why the role of zinc is so important in measuring the quality of an ovum to improve fertility therapies in the future.

In addition, zinc can help reduce the size of fibroids, which are often responsible for fertility problems, and regulate hormone levels. This increases the likelihood of pregnancy.

Sustaining Zinc Depots in the Body

Although zinc is crucial to health, most people do not consume enough of the trace element. During cooking and heating, zinc content in food is reduced by half, which is why raw zinc sources are so good. These include, but are not limited to oysters, raw pumpkin seeds and sesame seeds. Other valuable zinc sources are dairy products such as yoghurt and cheese, liver, lamb, beef, peas and various types of fish.

Our way of life can lead to zinc deficiency. Factors include stress, pollution, alcohol, and nicotine use. A healthy lifestyle is essential in terms of ensuring a healthy amount of the important trace element and ultimately improving fertility. If you are not consuming enough zinc, a dietary supplement is recommended. 15 mg per day should be sufficient.