Home » Will Cycling Cause Infertility in Males?

If you’ve been around the cycling world for any time at all, chances are good that you’ve heard of cycling causing infertility problems in men who ride regularly.

While cycling is a great way to stay fit, we are going to examine the effects that it may have on male reproductive health and if taking a break from the sport would be a good choice.

What causes a lack of fertility in men?

Infertility is primarily caused by a low sperm count and the shape and size of the individual sperm. The journey to the egg is an arduous one, so the sperm must be healthy, in high counts and able to survive the journey as nearly all of them die in the attempt. Normally, one milliliter of sperm fluid contains approximately 20 million sperm. At least 30 percent of this amount should have a normal shape and more than a half should have a good mobility, otherwise the man is typically unable to have children.

What are the possible effects of cycling on sperm health? 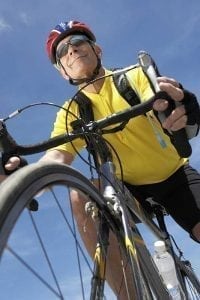 Nearly all of the studies done on cyclists have been small, and they were performed on elite athletes logging very high weekly mileage.

There is very little data compiled on competitive cyclists who are not yet at the elite levels of the sport, and even fewer studies done on recreational riders who may only cycle a few hours per week or commute to and from work.

The most comprehensive and relevant study was performed by a Boston-area clinic that tracked over 2,261 men from all athletic backgrounds for a 10-year period. Over 4,500 samples were tested, focusing on total volume of sperm, as well as overall morphology and motility.

Findings concluded that men who cycled more than five hours per week did indeed have a lower sperm count than both their sedentary counterparts or men engaged in other forms of exercise.

However, no definite link was made between cycling and infertility.

In another study, 5282 male cyclists were assessed between 2012 and 2013. They had to report whether they had potency problems, been diagnosed with infertility or suffered from erectile dysfunction. In addition, their weekly bike stint was raised. Factors such as weight, age, alcohol consumption and any diseases such as heart attacks, diabetes and cancers were also been given. Weekly cycling time was grouped into participants who cycled less than 3.75 hours per week, those who spent between 3.76 and 5.75 hours on a bike, cyclists with a stint from 5.76 to 8.5 hours and those who spent still more time on the bike.

The result: There was no link between infertility or erectile dysfunction and many miles of cycling a week, even for more than eight-and-a-half hours.

While there wasn’t conclusive and irrefutable evidence that cycling caused infertility, there is a strong relationship between infertility and low sperm count, and cycling more than five hours a day did reduce sperm count.

So let’s look at some factors that can cause low sperm count in cyclists:

Should you keep riding, or are you too sexy for your saddle?

Too little research has been done on this subject to enable one to come to a definite conclusion that cycling harms a man’s reproductive health and most of what research there is focuses on very elite cyclists and triathletes.

The only conclusive link has been with regards to sperm count, and while that is a major factor in male reproductive health, no evidence yet exists that unequivocally shows that cycling causes infertility.

Until more evidence comes out with solid evidence that cycling is a direct cause of fertility problems with men, it’s safe to say that unless you’re one of the rare top athlete exceptions, keep riding.