For a woman planning to become pregnant, or one that does become pregnant, the foremost thing that she should do is to ensure her health and the health of her future child through proper nutrition.

Before, and especially during pregnancy, it is not always easy to get the complete nourishment needed for optimal reproduction health without resorting to vitamin supplements, as the growth of a developing baby depends heavily on the food and nutrient supplements that the mother consumes before and during her pregnancy.

While the role of vitamin K in embryonic and fetal development and its impact on the field of fertility research is relatively new, studies suggest it should be considered that vitamin K supplements be included in a preconception and prenatal nutrition.

What is Vitamin K

When it comes to fertility and nutrition, this type of K vitamin is gaining more and more interest from couples who are looking to overcome fertility issues and start their family.

Fertility depends strongly on factors of nutrition, among other things, and studies have found a some interesting results with specific factors.

Aside from fertility, prior research found that K2 worked toward improving insulin sensitivity for diabetics, which provided a lead for researchers looking into polycystic ovarian syndrome (PCOS). Researchers have examines the role of Vitamin K2 and PCOS and have since found benefits of  oral K2 (Menaquinone-7) for PCOS when it comes to improving PCOS biomarkers such as body composition, glycemic indices, lipid profiles, DHEA and free testosterone, and more.

Studies have also shown a possible connection between Vitamin K1 and endometriosis, through findings that K1 deficiency leads to higher rates in endometriosis patients with severe bleeding.

While no direct studies have been conducted on Vitamin K2 and endometriosis, one study has linked Vitamin D to the severity and onset of endometriosis.

In regards to men’s fertility and reproductive health, initial animal studies Vitamin K2 has also shown to provide improvements in testosterone production, which may lead to improved sperm counts and other factors of sperm health. 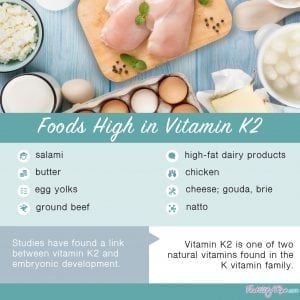 In addition to preconception nutrition, couples who are generally healthy usually have no problem conceiving. Potential parents planning to have a baby need to make sure they have a nutritious diet, especially one that is rich in vitamin K2 as the benefits of K2, are found to benefit embryonic development. One study conducted in 2014 looking at the link of K2 in embryonic development found that an enzyme called UBIAD1, which is involved in K2 synthesis, is required for the development of new embryos in mice. A second study, done by Canadian researchers, found that K2 supplementation significantly improved embryo production in cows.

Finding vitamin K and knowing how much to consume

The standard recommended dosage of vitamin K from food and supplements for women is up 90 mcg/day. However, amounts may vary from person to person depending on need. That said, getting a sufficient amount of vitamin K2 from food alone, is not as easy as one may think and many times supplementation is necessary.

While there are several vitamins and natural approaches to boosting fertility, vitamin K and K2 may be one of the many nutrient options that can aid in the process.