Vitamin E is a powerful antioxidant that protects the skin from the effects of UV radiation, damage from air pollution, and oxidative stress. It can also help minimize the appearance of acne scarring and reduce signs of aging related to dryness, thinning hair, and uneven skin tone.

Vitamin E’s protective effect is due to its ability to donate an electron to singlet oxygen, which then becomes “radical oxygen” that can damage lipids, proteins, DNA and other cell components. This is further supported by data showing increased levels of vitamin E can inhibit lipid peroxidation in serum and tissues, increase the natural antioxidant capacity in plasma, and reduce oxidative stress after exposure to air pollutants.

The benefits don’t stop there. Among the number of health benefits provided by this essential nutrient, in regard to protecting the body against oxidative damage, this free radical protection can also help aid women in their reproductive health and fertility potential.

Due to a reduction in estrogen during menopause, and the natural fluctuations of the hormone throughout the menstrual cycle, women’s bodies are more susceptible to free radical attack. The correlation between this hormone and free radical damage is simple; estrogen has been found to scavenge free radicals and act as an antioxidant.

Additionally, vitamin E largely improves the reproductive outcome by increasing prostaglandins, which increase the production of vitelline fluid that nourishes the egg during its development. The addition of vitamin E, through supplementation, can alter this fluid composition.

Broken down to simpler explanation; vitelline fluid is a secretion that helps nourish the egg in the female reproductive tract and then facilitates penetration of the sperm through the thick membrane surrounding the ovum, also known as zona pellucida, after ovulation. This fluid consists mainly of water and contains fats, proteins and minerals (including low levels of calcium, magnesium, and iron, and higher amounts of copper, zinc, and manganese).

In addition to the antioxidant benefits and role in estrogen synthesis, vitamin E is also a natural source of folate, commonly known as Vitamin B9, which is a water-soluble vitamin that naturally occurs in high levels in leafy vegetables. Foods like spinach and romaine lettuce are rich sources of folate, while legumes and grains provide smaller amounts. When it comes to fertility and pregnancy, this nutrient has been shown to aid in cell metabolism, optimize the homocysteine pathway in follicular fluid, play a role in balancing stress and inflammation in the body, and help prevent neural tube defects which can lead to miscarriage or birth defects. Folate deficiency can also lead to irregular menstrual cycles, making it difficult for women to conceive.

Vitamin E is the last step of early embryo development. It prevents oxidative damage to the embryo and may protect the next stage of embryonic development. Research has found that females with a diet rich in vitamin E are more likely to conceive at a younger age than those with low vitamin E intake. Therefore, it is suggested that women who do not have regular menstrual cycles may benefit from vitamin E intake, as it can help regulate their cycles. 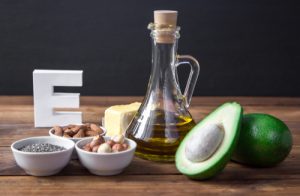 Vitamin E can be bound to plasma proteins and transported throughout the body, something that is rather important during pregnancy. It provides a protective role against oxidative damage for mom and baby and prior to pregnancy may even help to improve implantation. The binding capacity for vitamin E is important for protein transport in the body. It might be linked to the fact that during pregnancy, the accumulation of vitamin E-binding protein referred to as afamin (alpha-fetoprotein) increases, which prevents, or limits, the oxidative stress associated with pregnancy. This helps the body adapt to pregnancy and may also help to improve implantation.

The current recommended daily allowance (RDA) for women is 15 mg of vitamin E per day. However, research suggests that the optimal intake is closer to 22 mg a day. That’s the equivalent of one-half cup of sunflower seeds or one cup of broccoli or spinach.

The optimal range of vitamin E intake specifically for the prevention of oxidative stress and cardiovascular disease lies between 30 to 60 mg/day, but may vary depending on an individual’s situation.

Like all nutrient advice, when in doubt, seek the guidance of a doctor or nutritionist to find the optimal amount of the vitamin that is right for you.

The good news about maintaining adequate vitamin E levels, regardless of the milligram recommendations is that by eating a healthy diet rich in leafy green vegetables and antioxidant-rich fruits can easily lead to optimal levels of vitamin E in the body.