Busting the Myths About Infertility

Starting a family is one of the most joyful experiences that a couple can go through and planning to have a child is a process that takes time for some. In many cases, couples who have been trying to conceive for a prolonged period find out that it is harder for them because of existing conditions or because of one individual’s or both partners’ infertility. This knowledge can cause an incredible strain on some, causing them a significant amount of stress as a result of it.

Couples who are going through this are not alone. The number of couples who are unable to conceive is far higher than what one would think. There are several misconceptions surrounding conception and the factors that affect it. There is data that couples need to know when planning to have a child or if they are having problems starting a family of their own.

Not Only a Woman’s Problem

In many societies, the problems that arise as a result of not being able to conceive are generally pinned on the woman. A woman, being the one carrying the child, is considered the primary factor that impacts the ability of a couple to start a family. While a woman can have conditions that affect her ability to conceive, they are not the only ones in question here. Men too can have an impact on the woman’s ability to conceive. Infertility is something that exists in both men and women and there are several factors that can impact fertility on both sides. Research conducted by the Centers for Disease Control and Prevention showcased that in cases where infertility was evident in just one partner, men and women shared the same probability rate. This argument is not to pin the blame of not being able to start a family on someone, but just to help couples realize that this is something that can happen to either the woman or the man, and it is not only the problem of the woman who is trying to have a baby.

(Not) Blaming the Swimmers 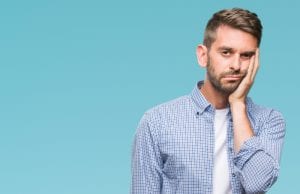 A lot of men tend to fall into emotional distress upon learning that their sperm count is lower than it should be. This is mainly a result of the misconceptions surrounding the sperm count and a man’s ability to get a woman pregnant. When conducting an examination, doctors tend to look at around thirty-nine million as the number of sperm cells per ejaculation. Just one of these needs to reach the egg of the woman to get her pregnant. A number that is slightly lower than the average is not a cause for concern because it doesn’t truly impact the ability of a man to impregnate a woman. Even though a lowered sperm count does make it harder for a couple to conceive, the numbers suggest that this is not significant enough to be placed under the umbrella of impotence. A study conducted by Oxford University showcased that the quantity of sperm per ejaculation has decreased since 1970, but it is still high enough to be able to start a family.

While it is always essential to have protected sex until you are ready to start a family, a lot of women tend to have misconceptions about their pregnancy as a result of the limited instances in which they did have unprotected sex and didn’t get pregnant. While some may consider themselves lucky in these instances, some women start to worry that they might be experiencing problems of infertility. Studies show that partners who have unprotected sex for over a year have an eighty percent chance of getting pregnant and this number does gradually even out over the years, but it is still considerable when looking at the bigger picture. Many couples get pregnant only after one or two years of continuous unprotected sex; and this too increases with age and is an incredibly common occurrence, which is why it is not something to worry about.