Millions of women in the world are trying their hardest to become pregnant. One of the tools used to test their success is the pregnancy test. Many modern pregnancy tests exist, but the most commonly used version is the test that is comprised of a dye line. These tests usually contain two lines of dye. One line establishes a control factor that the test is working properly, and the other line confirms or denies a pregnancy. While this may seem simple enough, many women often misread their test due to an evaporation line that sometimes appears and causes confusion.

How the Dye-Based Pregnancy Test Works

Most dye-based pregnancy tests have a strip of area on which the woman performing the test urinates. After urinating on the stick, the test is set down on a flat surface where the urine flows through the test and interacts with the dye. The dye changes color when it interacts with a hormone called hCG. HCG is a hormone that only appears when a woman has been impregnated. The “test line” usually turns colors first to let the consumer know that it is working. If hCG is present, then the second line, the “control line,” will turn pink or blue.

The average test takes about three minutes to show signs of a positive pregnancy test. Sometimes the results line changes colors immediately as the urine passes through the test. Sometimes the line does not change colors for a few minutes. The speed of the test result depends on the amount of hCG that the woman is carrying around in her blood. The color line can range from an extremely dark color to a very light color. The intensity of the line color depends on a variety of factors including the time of day that the woman takes the test, the amount of water that she consumed and the amount of time that she has been pregnant. A faint line is still a positive line as long as it shows up in the appropriate testing time window. It is when lines begin to appear after the appropriate testing window that the result may be inaccurate and misread. 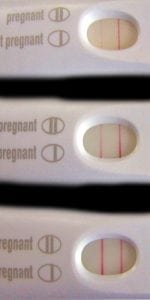 In some cases, the pregnancy test and evaporation line look exactly the same. The way that a person can tell the difference between the two is to focus on the test’s instructions. All pregnancy tests explain the validity window to consumers. The validity window is a period of time during which the test results are valid. The consumer is to dispose of the test after the period ends. The time period varies from test to test but is typically about 10 minutes.

A faint line that shows up after the test has been sitting for 10 minutes should be ignored if no line has shown up before then. Unfortunately, in this case, the test is negative and what is being seen is just the results of chemical interactions as the urine evaporates, known as the pregnancy test evaporation line.

To get the best results from a pregnancy test, the female should take the test exactly as the instructions explain. If a positive result is not seen within the specified testing time then the test should be discarded. Typically, when taking a pregnancy test, a woman should wait until her menstrual period has passed (unless she is taking an “early result” test) for the most accurate results.