Home » Poor Circulation and the Impact on Cervical Fluid

Many women will experience vaginal dryness at some point. However, if the condition occurs regularly, it can compromise the ability to become pregnant. Having a healthy amount of cervical mucus directly impacts fertility, and there are a variety of health factors that can weaken its production, such as poor circulation.

The widening of the blood vessels in the area allows for increased circulation, which is directly connected to cervical fluid production and flow. So, exactly what is the relationship between cervical mucus and fertility?

Cervical mucus and Its Importance to Fertility

Cervical mucus (or cervical fluid) is produced by the cervix. The type of mucus produced varies depending on where a female is in her menstrual cycle and can be divided into two categories: fertile and infertile. After menstruation occurs, the cervix emits infertile mucus, a thick and acidic mucus aimed to prevent sperm from entering the vagina.

Fertile mucus is characterized by wetness and pliability, protecting the integrity of the sperm and enabling it to move freely through the cervix and toward the ovum (egg). This type is produced just before ovulation, or the “prime time” for getting pregnant. Charting the changes in cervical mucus, known as the Ovulation Method, is one of the most common ways to accurately determine a woman’s most fertile time.

What Happens When You Have Low Mucus Levels? 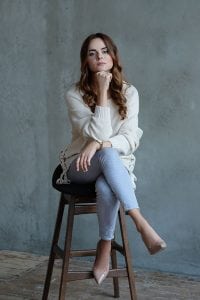 When vaginal dryness goes beyond being sporadic, it can be a sign that something in the system is not functioning properly. This makes it very difficult for the sperm to reach the egg for conception. Women who are trying to conceive and have detected low levels of cervical mucus will need to take active measures to support the body in producing cervical mucus through lifestyle changes and, sometimes, medical intervention.

Poor Circulation and Other Common Causes of Low Cervical Fluid

Some female bodies do not present a hospitable environment for sperm. This can be due to a variety of factors. For example, the body may have developed anti-sperm antibodies, creating a hostile environment. Hormonal imbalances, especially when concerning the estrogen and progesterone sex hormones, can also alter production. Infections such as yeast infection or sexually transmitted diseases can also affect fluid production and the cervical environment as a whole. Certain medications, particularly those containing high doses of hormone, can also alter fluid production and fertility in general.

Some causes for low cervical fluid production, though, are simple things that can happen to anyone on a daily basis. Luckily, these are also easy to mediate and remedy. Not taking in enough water each day plays a large role in decreased lubrication. Poor circulation due to a sedentary or inactive lifestyle also affects the reproductive organs.

Because the production of fertile cervical fluid is crucial for conception, it is an element of a woman’s health that should be given optimal attention and care. When production is low, there are many easy at-home tweaks that can be made to get the blood pumping and the organs working.

1. Staying hydrated by drinking plenty of water each day is necessary for overall health, but it is particularly important for those trying to conceive. The more hydrated the cervical fluid is, the more hospitable it is for sperm.

2. Don’t be a couch potato. Get up and moving as much possible in order to increase circulation and blood flow. Regular exercise will set you on the right track toward increased fertility and overall better health during pregnancy.

3. Many herbs and natural oils are known to support the health of mucus and improve their functioning. Castor oil, parsley, cayenne pepper, willow bark and green tea are all known to increase circulation but talk to a doctor before beginning any at-home remedy treatment.

4. The amino acid L-arginine is also linked to circulation and preservation of mucus fluids. In the female body, l-arginine converts into nitric oxide, which increases the size of blood vessels, promotes circulation, and preserves the strength and vitality of mucus.

If you are worried about fertility or are struggling to conceive, discuss your symptoms and options with a doctor for more information on how to move forward.