Have you ever noticed a fluctuation within your libido at certain points throughout the month?

A woman’s libido, also known as sexual desire, tends to peak during ovulation. Research shows that sex was found to occur 24 percent more frequently during a woman’s most fertile days of her cycle. This is said that the chances of becoming pregnant from a single unprotected act of sex is higher.

Reasons this May Occur

There are biological factors that promote a woman’s drive for intercourse during her six fertile days, regardless if conception is the goal or not. While composing a study of 68 sexually active women, research found that sexual intercourse peaks just before and on the day of ovulation.These women kept a diary of their intercourse and provided daily urine samples over the course of three months. The frequency of sex throughout the cycle was around twice a week, but during the six fertile days it was found to be about two and a half times per week. Therefore showing a 24 percent increase in sexual intercourse within a woman’s fertile days. This biological change in a woman’s libido has been seen to occur with or without the woman’s knowledge of her fertile days.

Is Evolution to Blame? 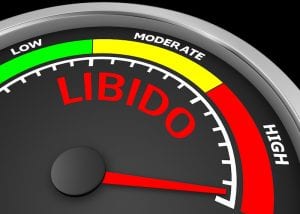 Looking at the natural hormonal changes and the increase in a woman’s sexual attractiveness during ovulation it may simply be evolutions way to help with procreation.

The biological purpose of life is to reproduce life, therefore evolution has boosted women to feel most sexually aroused when pregnancy is most likely to occur. In a similar sense, once the body has passed ovulation, premenstrual and menstrual days can usually bring discomfort and turn a women off from sex. Studies show that PMS and cramping that may occur tend to suppress a woman’s interest in sex.

Symptoms of low sexual desire may include:

If you notice a consistent decrease within your libido and are concerned, it may be time to consult a doctor.

While research does show a surge in women’s sexual desire during ovulation, this pattern is not always the case in all women. It is important to keep in mind that other things may also affect a woman’s libido . Things such as hormone imbalance, hormonal contraceptives, stress from work, and long term relationships have been shown to affect sexual desire.