Couples seeking to conceive may be defeating their efforts with their caffeine intake, but these natural sources of energy can be just as effective.

New Study Finds a Link Between Caffeine Intake and Infertility

The stimulant is found in almost every beverage we consume from coffee and tea to soda, so it’s not surprising that we consume caffeine without giving it much thought. However, a study conducted by the  suggests that you should be more wary of putting this particular substance into your blood supply. If you and your partner are trying to conceive a child, it may reduce your chances of success. High intake of the stimulant by either partner can decrease the possibility of conception, according to the study. When pregnant, the mother’s steady consumption of caffeinated substances may also increase the risk of a miscarriage.

The study of 344 couples looked at a variety of factors that might influence fertility, but the effects of caffeinated beverages and foods were especially surprising. In addition to recording the intake of caffeinated products, researchers also evaluated the health of each participant through blood, urine, semen and saliva samples.

The women in the study were also subjected to routine pregnancy tests. Within the course of the study, 28 percent of the women were found to have experienced at least one miscarriage. Those 35 years of age and older experienced double that rate.

Researchers also established that the high rate of consumption in men also contributed to infertility problems. They found that, when either partner consumed more than two daily servings of caffeinated beverages, the risk of a miscarriage was increased to a 74 percent likelihood. The study revealed that the high intake affected fertility, even if the women stopped drinking caffeinated beverages after conception.

How Exactly is Fertility Affected?

In addition to increasing the possibility of having a miscarriage, the frequent or high consumption of caffeine affects fertility in a variety of ways. Research has found that it creates an imbalance of hormones in women, which can inhibit conception. Specifically, it raises the levels of estradiol, or estrogen, to the point that ovulation is restricted. Muscle activity of the fallopian tubes is also affected, making it impossible for the eggs to be transported.

In men, drinking too many caffeinated beverages results in low sperm mobility. This means they can’t travel to the eggs as efficiently. As a result of this effect, conception can’t occur.

Even if women do become pregnant, the stimulant has the power to raise the risk of miscarriage in a couple of ways. For one thing, it inhibits calcium production, which is essential to bone health. In addition to affecting how bones are formed in the fetus, a low calcium count can prevent an embryo from developing into a healthy fetus. Also, excessive intakes of stimulants upset the body’s acid/alkaline balance. This makes the vagina and uterus hostile environments for sperm by reducing the levels of cervical mucus.

You Don’t Have to Give Up Coffee

Here are a few alternatives that can help you reduce the levels of stimulants in your system without forcing you to give up the pleasure of drinking coffee. If you’re trying to conceive, these healthier alternatives boost your chances. You might even like some of them. 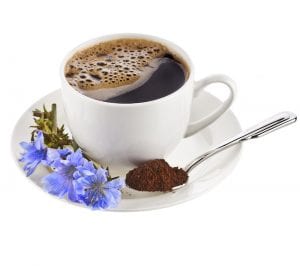 Some people get that boost of energy simply from the taste and aroma of coffee. If that’s the case with you, chicory root coffee might be the best alternative. While there aren’t any nutrients that specifically provide energy, it does provide an almost identical aroma and flavor. In fact, the renowned Café du Monde of New Orleans serves coffee derived from chicory root. Just steep in water and add milk and sugar to your taste.

This is for those who prefer a sweeter blend. In fact, carob has often been used as an alternative to chocolate. In addition to its sinful taste, carob also provides a number of health benefits. It aids in digestion, is rich in vitamins A and B, and acts like insulin to help boost energy levels. Carob is commonly used to make smoothies and to sweeten hot chocolate without adding sugar.

The maca root provides vast benefits for the mind and body, acting as a stress reliever and working to improve body functions. It also improves adrenal function to help fortify the kidneys. For the mind, maca maximizes mental acuity and helps to eliminate fatigue. It can be added to a smoothie or mixed with warm milk.

These are just a few alternatives that can help you kick the habit of caffeine and ensure a healthier pregnancy. If these options aren’t appealing, drinking water is another alternative. Switching to beverages derived from natural sources can help ensure you can conceive a child and deliver a healthy and happy baby.