Home » Minimal Stimulation: Providing a New Hope for the Infertile

If you are one of the estimated one in eight American couples who struggle with infertility, you might want to pay close attention to the studies being done on minimal stimulation in vitro fertilization (IVF). This less-invasive and less drug-reliant form of treatment for the infertile is proving to be a sought-after alternative to conventional IVF. If you have tried conventional IVF or wish to avoid its high costs or receiving injections, read on to learn more about minimal stimulation IVF and if it might be right for you.

What is Minimal Stimulation? 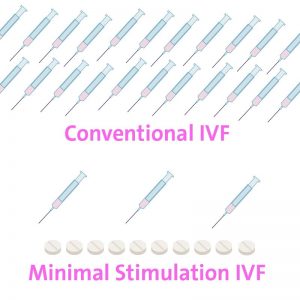 So, what exactly is minimal stimulation IVF? According to research conducted by Dr. Sherman J. Silber at the Infertility Center of St. Louis, patients with low egg counts exhibit the same responses to high dosages of fertility medications as they do to lower dosages. This study also labored under the notion that women with a lacking egg reserve could develop abnormal egg development if kept on high dosages of these medications.

Instead of using conventional IVF methods, minimal stimulation IVF uses a far more natural and gentler method for inducing fertilization. The typical gonadotropins used in conventional IVF (such as Menopur, Gonal-F, and Follistim) are substituted out for less invasive oral medications, which include Femara and Clomiphene Citrate. The overall goal of minimal stimulation IVF is to produce eight eggs of fewer. On occasion, a doctor might prescribe a mixed protocol of oral medications and gonadotropins, although gonadotropins are still prescribed at a significantly smaller dosage than they are in conventional IVF.

Prior to starting minimal stimulation IVF, you might be required to take a round of birth control pills to help you regulate your cycle and you will likely have to get an ultrasound performed by your doctor. If your doctor clears you for treatment, they will commence oral medication dosages to help you produce more eggs. If your doctor prescribes a mixed protocol solution, they will administer a gonadotropin injection once your follicles have fully matured.

One of the most obvious benefits of minimal stimulation IVF for those who are infertile is that it requires you to take far less in the way of medications. It has been noted that about 70 percent of women who take Clomiphene Citrate will ovulate when taking the drug. Of course, every woman has different physical and genetic circumstances, so effectiveness will vary between individuals.

Should I Try it if I’m Infertile?