Home » Male infertility: What influence does iodine intake have?

A significant factor that may impact men’s fertility is their iodine intake as it appears to impact many different variables related to fertility.

Even when couples are trying to get pregnant together, it can be difficult to accomplish. Only about half of all couples that try to become pregnant do so easily. This stems from a number of factors, but one of the more significant ones is male infertility. About 10 percent of men are involuntarily infertile. This can stem from a number of causes ranging from hormones to past infections and physical problems. However, men are less likely than women to seek treatment for infertility.

Infertility Due to Infection

A recent study found that infection and inflammation in the male reproductive tract is a common cause of infertility. Between 6 and 10 percent of infertile men are likely infertile due to infection and inflammation in various parts of their reproductive tracts. This is a significant finding, as the ability to treat or avoid these risk factors could have serious ramifications for a man’s fertility.

While there seems to be a correlation between iodine intake and male fertility, the exact role that iodine plays is not entirely known. One study examined 96 couples that were undergoing treatment for infertility. It appeared that an increase in iodine levels in semen was variously associated with different elements of fertility. 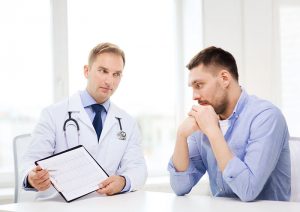 Men with higher levels of iodine in their semen produced sperm with higher morphological differences—that is, the sperm differed more greatly from each other. In addition, men with higher urinary iodine levels experienced a lower motile sperm count. Overall, the study found that men who had been trying unsuccessfully to get a partner pregnant for more than three years had higher urinary iodine levels than men who had been trying to achieve pregnancy with a partner for fewer than three years.

The study did not find a direct causal relationship between iodine intake and male fertility, but it did suggest some interesting correlations between the two.

A review of existing literature on the topic found that younger men who repeatedly undergo radiometabolic therapy as part of their cancer treatment, especially those men whose cancer presents in node or lung metastases, should be aware of the potential impact this treatment could have on their future fertility. The research suggests that radioactive iodine used in radiometabolic cancer treatment does not necessarily negatively impact fertility. However, the testicular function should be carefully monitored and men may consider freezing their sperm out of an abundance of caution.

In conclusion, male infertility is a significant concern. There are many different factors that may lead to male infertility, but it is relatively common. Infertility treatments traditionally focus on women, as men are less likely to seek help and women are more accustomed to routine gynecological appointments. However, in cases where becoming pregnant is difficult, men should be tested for infertility themselves.

It is clear that iodine plays a role in male infertility. However, it is not yet clear in what ways exactly. More research is needed to determine if consuming or avoiding iodine can have an impact on male fertility.