There are many reasons for male infertility. Besides unfavorable lifestyle choices such as the consumption of alcohol and nicotine, a poor diet, stress, environmental toxins and certain diseases may also be responsible for sterility in men. In rare cases, male infertility can also be caused by genetic abnormalities.

This genetic disorder, which only affects male newborns, was first described by the American doctor Harry Klinefelter in 1942. Klinefelter syndrome is a form of chromosomal maldistribution caused by a random error in cell division. In addition to the 46 chromosomes normally found in the human body, affected men have an additional X chromosome, resulting in an XXY chromosome arrangement rather than an XY arrangement. About one in 900 males are born with this genetic defect. 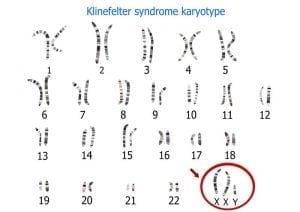 The first signs of Klinefelter syndrome usually aren’t noticeable until puberty. Boys who have this genetic defect suffer from testosterone deficiency, which causes both delayed and incomplete puberty. Male physical traits such as facial hair, a deep voice and other secondary sex characteristics are less pronounced, and libido may be reduced. It is also common for men affected by Klinefelter syndrome to experience breast enlargement (gynecomastia). While the testicles and penis tend to be below average in size, affected individuals are often taller than average and have an increased leg length. Young men with Klinefelter syndrome often suffer from other diseases such as osteoporosis, diabetes or heart defects. Since these symptoms don’t necessarily manifest or aren’t always detected, a diagnosis often isn’t made until later in life—namely when infertility is suspected.

Hormone replacement therapy with special testosterone preparations can achieve a normal hormone balance in adult men with Klinefelter syndrome. For those affected, this usually means a better quality of life and a more masculine appearance. Muscle mass, strength and bone density can be improved this way, and a normalization of blood values, glucose metabolism and libido is also possible. The right preparation and time at which the therapy is started varies from patient to patient and must be monitored regularly. There are different opinions about when testosterone substitution should first take place. Some evidence suggests that hormone replacement should be started at the age of puberty, but there haven’t been enough controlled trials to confirm this. However, the danger with hormone replacement is that it can suppress the body’s own testosterone and sperm production.

Persistent testosterone deficiency means that men with Klinefelter syndrome can only rarely father children since either no sperm or only a small number of functional sperm insufficient for fertilization is produced. Over 90 percent of those affected experience azoospermia, a condition in which the ejaculate contains no mature sperm. 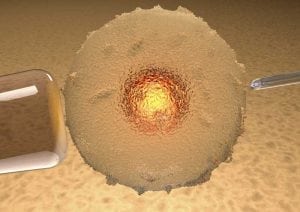 In some cases, viable sperm can be extracted from the ejaculate of men with Klinefelter syndrome and be used to fertilize the female egg via ICSI (intra-cytoplasmic sperm injection). However, the chances of success using this method are extremely low. Significantly better results can be achieved via TESE (testicular sperm extraction).

TESE refers to the surgical extraction of sperm from the testicles. This method involves a minor operation, which is generally performed as an outpatient procedure under general or local anesthesia. During the surgery, an incision is made to expose the testes (either on one or both sides) in order to biopsy the tissue. First, it is determined whether the man has sperm in his testicular tissue. Subsequently, the sperm-containing tissue samples obtained during the operation are frozen. After egg cells have been extracted from the female patient, the frozen testicular tissue is thawed and the extracted sperm is injected into the egg cells via ICSI. The success rate is generally higher if the more recently developed microsurgical TESE (M-TESE) technique is employed instead of the conventional TESE technique. In approximately 70 to 90 percent of men, sperm can be extracted from the testes via TESE. Possible complications after surgery include bleeding, swelling, pain and infection of the epididymis, but these complications are very rare. The overall chance of success using TESE is very good: About half of those affected by Klinefelter syndrome are able to achieve a pregnancy and live birth using this method.

A study published by Schiff et al. from the Weill Cornell Medical College in New York in the Journal of Clinical Endocrinology & Metabolism showed that out of 42 men with Klinefelter syndrome who simultaneously underwent 54 TESE surgeries, sperm was found during 39 of the procedures, yielding a rate of 69 percent. After the subsequently performed ICSI treatments, 21 children were born alive, which equals a “baby take-home” rate of 46 percent. In addition, all babies were born with a normal set of chromosomes.

Younger men have a better chance

Because younger patients with Klinefelter syndrome are more likely to have sperm in their testes, it may be advisable to remove tissue as early as puberty and to have this tissue frozen (cryopreservation). However, since testosterone suppresses sperm production, substitution with male hormones shouldn’t be carried out until later in this case. Many men with Klinefelter syndrome are afraid that they will pass on the chromosomal maldistribution to their children—but this is rarely the case. There is no high genetic risk for children of fathers with Klinefelter syndrome. To avoid any remaining risks, an invasive genetic prenatal diagnosis should be considered.