The Wnt signaling pathway is one of many signal transduction pathways through which cells can react to external signals. This signaling pathway plays an important role in normal embryonic development and the emergence of diseases. In biology, Wnt signaling molecules can be found everywhere. They are present in insects as well as humans and determine the physicality of all living organisms. Wnt directs a number of the body’s developmental processes but it can also lead to the development of cancer if the signals become overactive. Wnt binds to docking sites on the cell surface and fulfills its functions through an extremely complex cascade of protein interactions inside the cell.

“We’ve always asked ourselves whether Wnt can control functions inside the body without genes being activated and read,” explains Christof Niehrs, research department head at the German Cancer Research Center and head of the Institute of Molecular Biology in Mainz, which is funded by the Boehringer Ingelheim Foundation. 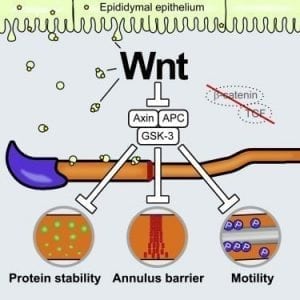 Sperm cells mature during their passage through the epididymis, after which they are able to fertilize egg cells. Scientists at the German Cancer Research Center in Heidelberg and the Institute of Molecular Biology in Mainz have now discovered that Wnt signaling molecules coordinate this maturation process. The surprising finding: The Wnt signaling pathway has a different effect on spermatozoa than previously thought. The cells of the epididymis emit Wnt, which is responsible for motility and significant changes in the protein properties of the sperm cells. During this process, Wnt signaling occurs at the established, previously known switching stations but later also affects other target molecules. This was discovered by Stefan Koch and Sergio Acebron from Christof Niehrs’ research group based on experiments with mice.

Experiments with mice and the results

In experiments with rodents, the researchers found that mice that did not have the newly discovered activator of the established Wnt signaling pathway were infertile and had malformed, immotile sperm. Based on this, the scientists were able to clearly demonstrate that the established Wnt pathway regulates bodily functions without stimulating transcription. In addition, the decisive factor in coordinating the maturation of sperm is now known. According to Stefan Koch, these findings may be medically relevant because Wnt could have a significant effect on male fertility. Some of the agents that inhibit or activate the Wnt signaling pathway are already being tested in clinical trials to gain regulatory approval. In the future, these substances may play a role in remedying fertility problems as well as in contraception.