In our 24/7, always-on world, light pollution is a given. Streetlights, store lights, continuously lighted office buildings, headlights and taillights can make the night seem almost like day. Our natural cycles of light have changed.

But can our increasing reliance on light be decreasing female fertility? Some scientific research seems to indicate it might.

In 1974, Louise Lacey wrote Lunaception, a book based on her personal experience that suggested that in ancient times, women’s menstrual cycles were tied to the cycles of the moon. She suggested that women were the least fertile at the new moon and ovulated when the moon was full. As humans began to rely more and more on unnatural light, she suggested, women’s menstrual cycles got out of whack and their fertility decreased.

Lacey’s solution: By sleeping in a completely dark room for all but three nights of the month, women can reset their menstrual cycles and their fertility. The night of the full moon and the nights immediately preceding and after it, moonlight is allowed into the bedroom. The procedure would take several months to work, she postulated, but women would increase their chances of getting pregnant.

The Mice That Could—and Couldn’t—Get Pregnant 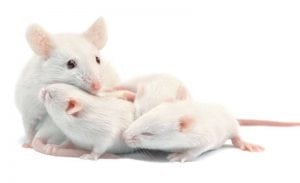 Lunaception has not been scientifically tested, although evidence seems to indicate that women who work at night and who frequently cross time zones have problems with fertility and with menstrual regularity. However, scientists at Northwestern University have performed tests that may indicate there’s some truth to Lacey’s theory.

The researchers separated newly inseminated mice into three groups. The control group got regular sleep at regular times: 12 hours of daylight and 12 hours of nighttime at the same time every day. Researchers shifted the sleep/wake cycles of the other two groups, shifting one forward and one backward, and then compared the results.

At the end of the experiment, 90 percent of mice in the control group had successful pregnancies. That success rate dropped to 50 percent of the mice in the group shifted forward and only 22 percent in the group shifted back. In the mice with unsuccessful pregnancies, the problems occurred early on, leading one researcher to suggest that the change of light led to problems with the embryo attaching to the wall of the uterus.

Additional studies showed that changes in the light/dark cycles did not affect mice that were already pregnant.

A more recent study showed that cycles of light and dark affected fertility in middle-aged mice, but not in younger mice. Additionally, fertility problems caused by the changes in light could be reversed when the cycle returned to normal.

Mice aren’t people, although their reproductive cycles are similar, so women who work late shifts or must travel for their jobs shouldn’t panic right away. But if they’re trying to get pregnant, researchers suggest making changes in their light/dark cycles might make a difference in their fertility.