New research may afford future predictability of IVF success, as an abnormal gene expression within the womb may relate to the uterus’ inability to allow embryo implantation.

As the number of couples facing infertility has been on the rise, so has in-vitro fertilization research. In 2015, researchers made several advancements from the ability to detect chromosomal abnormalities in embryos prior to implantation to the use of stem cells to produce healthier eggs and to the use of spermbots for poor sperm motility. However, the biggest groundbreaker is the most recently published study in the journal Scientific Reports.

The co-leader of this study, Professor Nick Macklon, the University of Southampton’s chair in obstetrics and gynecology, has stated that this discovery can help understand why some women repeatedly have failed in-vitro fertilization attempts.

Professor Macklon also acknowledged that prior to this study, it was unclear whether or not the lining of the womb may be a causative factor for women who have undergone a number of in-vitro fertilization cycles using good quality embryos that were unsuccessful. 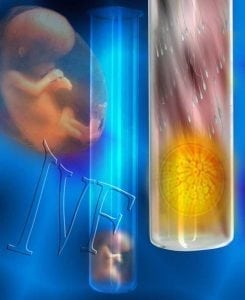 Recurrent implantation failure occurs when women fail to achieve pregnancy after three or more high-quality embryo transfers or multiple transfers of 10 or more embryos. 43 women meeting the implantation failure criteria and 72 women that had given birth after an intra-cytoplasmic sperm injection or in-vitro fertilization underwent biopsies of the lining of their womb for study purposes.

According to study results, the presence of a specific gene “fingerprint” is always associated with IVF failure.

The interpretation of these results tells experts that a large proportion of women who experience recurrent implantation failure may actually be infertile due to the inability of their uterus to be receptive of embryos for implantation.

What This Study Means for The Future of Fertility Treatments

A single cycle of in-vitro fertilization has an average cost of at least $10,000. In addition to financial stress, women who experience a failed cycle have a greater risk of developing anxiety and depression in the following months. Many women undergo multiple cycles of in-vitro fertilization without success, causing couples to repeatedly experience this emotional and financial devastation. Future couples may be spared this heartbreak, as this study could result in the development of testing that women can undergo prior to pursuing infertility treatments.

According to the study experts, women with this gene “fingerprint” have a very small chance of achieving a successful pregnancy. The ability to predict treatment success can give more clarity to clinicians when they are counseling patients on treatment options, which will allow patients to make a well-informed decision before undergoing initial or ongoing treatments.

This study could very well be the most significant development in fertility research. Experts say the next step is to pursue further clinical testing to study these finding on a wider scale.