Home » Everything You Want to Know About Ectopic Pregnancy

Ectopic pregnancy occurs when the embryo implants outside of the uterus, typically in one of the fallopian tubes. While an ectopic pregnancy cannot become a viable pregnancy, if left untreated, it can cause severe bleeding, infection and even death of the mother.

When it comes to an ectopic pregnancy, in most cases, this condition is caused by a blockage or inhibited movement of the egg through the fallopian tube, however a number of risk factors are possible.

Of all the causes of ectopic pregnancies, infertility drugs account for a large percentage. The most common drug that causes an egg to become fertilized outside the uterus is Clomid (also known as clomiphene citrate). It works by causing your body to increase estrogen levels and tricking your brain into thinking you’re pregnant so it can release eggs. If this happens early enough in pregnancy, before implantation occurs, embryos will attach themselves outside of the uterus. In fact, up until recently, 50 percent or more women who were prescribed fertility drugs became pregnant with what’s called “a heterotopic” pregnancy, where one embryo implants inside the uterus, and another attaches itself somewhere else.

The next most common cause of ectopic pregnancy is pelvic inflammatory disease (PID), which affects more than 1 million women in the United States each year. The presence of, or a history of PID can result in scar tissue formation that hinders the movement of the egg through the fallopian tube.

One of the most common causes of ectopic pregnancies is pelvic inflammatory disease or endometriosis. In both cases, scar tissue builds up in the fallopian tubes due to untreated infections. It can cause an embryo to implant outside the uterus after the egg is released from the ovaries and conception has occurred. This type of abnormality becomes more likely if you have had a cesarean section or hydrosalpinx, a condition in which one tube becomes filled with fluid. Hence, embryos are released into the abdomen instead, where they attach themselves elsewhere. Infertility drugs also increase your risk for this condition. Drug therapy makes it difficult for fertilized eggs to travel down fallopian tubes before implanting inside the uterus (in an ectopic pregnancy, the embryo implants in fallopian tubes, not the uterus).

In rare cases, ectopic pregnancy may be caused by a uterine abnormality, such as if the uterus is not shaped typically or has congenital malformations. In these situations, embryos attach themselves to abnormal tissue that naturally occurs in utero and cannot support fetal growth, which causes miscarriage early on before you even know you’re pregnant. Other risk factors for ectopic pregnancies can include polycystic ovarian syndrome (PCOS), endometriosis, tubal ligation reversal, previous ectopic pregnancy or pelvic surgery, or conception while an intrauterine device (IUD) was in place. 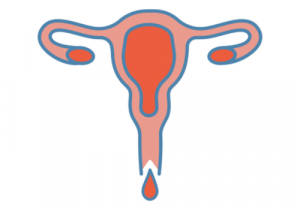 When an ectopic pregnancy occurs, a number of symptoms may be present.

The most common symptom of ectopic pregnancy is vaginal bleeding that occurs after becoming pregnant. This can be a bright red color, or it may resemble your average period as some women mistake this for the menstrual cycle before they become aware they’re pregnant. Ectopic pregnancies typically cause miscarriage long before symptoms occur. In addition, you might also experience pelvic pain and cramping, which feels similar to what happens during menstruation but with an added sharp stabbing sensation and cramps that don’t go away even when taking ibuprofen or acetaminophen.

The main symptom of ectopic pregnancy is abdominal pain that tends to occur in one side, typically the fallopian tube where the embryo attaches itself. This can be a sharp or stinging kind of pain that occasionally goes into your back and may feel like it’s getting worse over time. Some women mistake this for appendicitis since it also tends to be accompanied by severe belly pains with nausea and/or vomiting. Still, unlike appendicitis, ectopic pregnancies do not cause fever or chills unless they become life-threatening emergencies that could cause a woman to go into shock.

In addition to pain in the abdominal region, pain may also be experienced in the pelvis, neck or shoulder, due to blood pooling under the diaphragm after a rupture.

Treatment of an ectopic pregnancy varies, depending on how far the condition has progressed and how severe symptoms currently are, however the main factor to know is that with an ectopic pregnancy, there is no way to save the pregnancy and medication or surgery are the only options.

In some cases, ectopic pregnancies can be treated with oral medications such as Methotrexate, which is typically used for treating rheumatoid arthritis, severe psoriasis and certain types of cancer. When it comes to using it for ectopic pregnancy, this medication stops cell growth inside the fallopian tube so the embryo cannot grow or attach itself to the tissue lining. Ectopic pregnancies have been reversed using this method. Up to 80 percent of women are diagnosed before five weeks from conception, and it’s also safe enough that doctors will first try it before recommending surgery, which should only occur if a woman has a sizeable tubal tumor.

The most common surgery to treat ectopic pregnancy is called salpingectomy, which involves removing one or both of your fallopian tubes where the embryo attached itself. This type of procedure can also be done via laparoscopy (minimally invasive surgery with minor incisions). Still, this option often requires hospitalization after the operation, and recovery time may take several weeks for complete healing. If you have an emergency ectopic pregnancy, doctors will typically recommend immediate surgery since removing the remaining tube is easier if the woman does not undergo treatment fast enough before internal bleeding starts occurring, which is dangerous.

After surgical treatment, a doctor will perform blood tests to confirm hormone changes that indicate the pregnancy has ended and the mother are no longer at risk for serious and even life-threatening issues.

Ectopic pregnancies are relatively rare, occurring in one in every 50 pregnancies, and while there are risk factors, they can occur in women with no history of infertility or fallopian tube problems. This type of pregnancy requires immediate medical attention since it’s considered an emergency life-threatening condition if not treated promptly enough. Which is why paying attention to symptoms and causes for concern such as vaginal bleeding, abdominal pain and cramping, is so important for women.