It’s no secret that female fertility decreases more and more over the years. Especially women in their mid-30s experience dramatically reduced fertility. While a woman in her 30s has a 20 percent chance of becoming pregnant from month to month, this chance drops to just five percent at age 40! This is the reason why, physiologically speaking, it’s best to have children at a young age—preferably in one’s 20s—when fertility is at its highest. However, modern life planning is often in direct contradiction with this. Women invest time in their education, want to have a career and enjoy life before considering having children. Also, the right partner may not be available at the right time. When the perfect time has finally come, it might be too late.

Why does female fertility decrease? 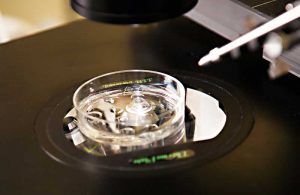 Unfortunately, the quality of female egg cells declines with age. Girls are born with a specific supply of eggs (about one million gametes), which declines over the years due to radioactivity and other toxic influences such as alcohol and tobacco consumption. With advancing age, the eggs become increasingly damaged, making it more difficult to conceive and increasing the likelihood that genetic defects might occur in the unborn child. This is where egg freezing (oocyte cryopreservation) can help.

Egg freezing and how it works

The freezing of oocytes was originally developed for cancer patients to protect cells from the damage caused by chemotherapy and thereby preserve women’s ability to later have children. Today, the method is also used by healthy women who would like more time for family planning. Since there are no medical reasons for the oocyte cryopreservation in this case, it is sometimes referred to as “social freezing.”

Similarly to artificial insemination, women are administered hormone injections prior to the egg cell collection to stimulate the maturation of oocytes. This is especially important so that several eggs are formed, rather than just one per cycle. The German Society of Gynecology and Obstetrics recommends freezing at least 10 (but ideally 15) egg cells to have a realistic chance of pregnancy. The extraction is carried out with the aid of a needle via the vagina and usually takes place under anesthesia. Then the eggs are frozen and stored in liquid nitrogen at negative 320 °F until the woman is ready to have them fertilized and inserted into her uterus. The process allows egg cells to be safely stored for decades.

In the United States, the freezing of oocytes has become an established practice in society. Strange but true: Young women sometimes receive the cryopreservation treatment as a university graduation gift from their parents. In addition, there are now “egg freezing parties” much like Tupperware parties, where women can learn more about the procedure in a relaxed atmosphere. But it doesn’t end here: US companies like Facebook and Apple pay their employees up to $20,000 if they decide to freeze their egg cells. Even the storage costs are covered, which can add up to an additional $10,000. In this way, companies hope to prevent their valuable female employees from choosing to become pregnant during their peak fertility time and leaving the workplace. In Germany, too, the process is becoming more popular, albeit at a much smaller scale: Fertility doctors estimate that about 500 women freeze their egg cells annually—a trend that could continue to grow in the coming years. According to the reproductive specialist and gynecologist Michael von Wolff, the majority of women who opt for oocyte cryopreservation are between 35 and 40 years old and are currently without a partner. In Austria, oocyte cryopreservation has not yet been legalized, and egg cells may only be frozen for medical reasons such as undergoing chemotherapy.

According to the fertility doctor Michael von Wolff, the medical risk for women who opt for the procedure is very low. Possible complications can include bleeding or infection. However, if intense hormonal treatment is administered in order to obtain as many egg cells as possible, side effects can include water retention, head and abdominal pain and, in severe cases, a condition called ovarian hyperstimulation syndrome (OHSS)—a drastic enlargement of the ovaries that causes nausea, abdominal swelling and an increased risk of thrombosis. The older the woman, the more difficult it is to obtain enough egg cells, which is why the number of treatment cycles and at the same time the risks and costs increase. Serious complications are nonetheless rare. According to one study, these only occurred in 0.7 percent of the 900 treatment cycles studied.

Other risks that may arise from egg freezing:

Many women do not freeze their eggs until their mid-30s, which means the eggs may no longer be in optimal condition. In addition, serious pregnancy complications such as hypertension, diabetes and possibly premature birth may occur in women who choose to fertilize their eggs at age 40 or later. 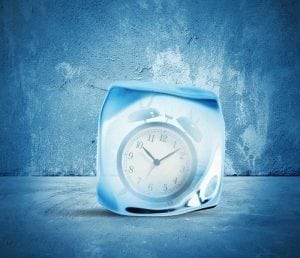 In theory, eggs can be frozen indefinitely before they are fertilized, which poses the question of how long egg cells may be used. Since there is currently no clear legal regulation in place, state governments in Germany usually stipulate that the eggs may not be stored for more than 25 years. The woman’s age also plays a role. Many treatment centers, in particular in Spain, only allow oocyte donation until the age of 50. In other countries, there are no age limits.

Those who opt for oocyte cryopreservation should expect high costs. According to the German gynecologist Wolf Bleichrodt, the procedure costs at least 2,000 Euros. This includes stimulation of the egg cells, extraction and freezing. In addition, storing the egg cells costs around 300 Euros per year. One clinic in Hamburg currently lists prices between 3,000 and 3,500 Euros. Depending on how long the eggs are stored, the costs can vary greatly.

The success chances of a pregnancy with frozen eggs depend on the age of the woman. According to the gynecologist and fertility specialist Michael Wolff, the ideal age is 35 years. This coincides with the findings of Australian fertility doctors, who conducted a study on oocyte cryopreservation. Accordingly, egg freezing is especially suitable for women in their 20s or early 30s. If the egg-removal is done at this age, almost all oocytes survive after freezing and thawing (80-90 percent), and 50 to 70 percent of these can be fertilized normally. This means that if 10 egg cells are frozen, three or four embryos can be successfully implanted. But here too, opinions differ. Ute Czeromin, a fertility doctor and chairman of the German IFV Register, thinks that women should get their eggs frozen before age 30, because younger women have a greater chance of becoming pregnant after the fertilized eggs are implanted. In older women, more egg cells have to be removed in order to achieve pregnancy.

Egg freezing: A look ahead

Even though oocyte cryopreservation is a way to become pregnant later in life, the method still hasn’t become a standard procedure in most countries—largely because egg freezing is associated with high costs but doesn’t offer a very high success rate in return. While the chances of having a baby using this method are estimated at 30 to 40 percent, the number of children who were born using oocyte cryopreservation isn’t big enough yet to provide concrete evidence. Even if medicine continues to advance and there are promising possibilities for an alternative pregnancy today, female fertility will always have a natural expiration date.