Home » Can Vaccines Against COVID-19 Change the Length of the Menstrual Cycle?

Infection with COVID-19 still poses great challenges for people. The virus can affect our health in a variety of ways. In addition to flu-like symptoms such as fever, cough, breathing difficulties and general weakness, risk groups in particular can suffer serious complications. For many, the question ist, if the corona virus and anti-SARS-CoV-2 vaccines have an impact on fertility. A lot of research has already dealt with this topic.

A large international study has confirmed the results of an earlier US study that linked COVID-19 vaccines to an average increase in menstrual cycle length of less than a day. Funded by the National Institutes of Health, the new study included data from nearly 20,000 people from Canada, the United Kingdom, the United States, Europe and other parts of the world who had received one of nine different vaccines. In most study participants, the increase in menstrual cycle subsided after vaccination.

A cycle length change of less than eight days is considered within the normal range of variation. Although small cycle changes are not a cause for concern for health professionals, this information could be alarming for affected woman who are sceptical about vaccination. 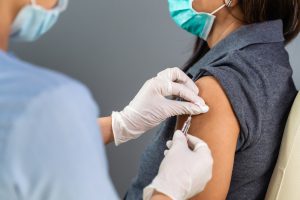 The researchers analyzed anonymized data from the fertility tracking app Natural Cycles. The users of the app provided information regarding temperature and menstrual cycles. They also had the option to consent to the use of their anonymized data for research purposes. The global rollout of COVID-19 vaccines allowed the study authors to expand their original study to include humans in the United States. The study included data from participants from all over the world, but most came from the UK (32%), the United States and Canada (29%) and Europe (34%). In addition to mRNA vaccines (Pfizer-BioNTech and Moderna), participants received COVID-19 vaccines made from genetically engineered viruses (AstraZeneca, Covishield, Janssen/Johnson & Johnson, and Sputnik) and inactivated viruses (Covaxin, Sinopharm, and Sinovac).

COVID Vaccines Have an Effect on the Menstrual Cycle, But Only Minor Changes Were Found

Of a total of 1,342 subjects, there was a change in cycle length of eight or more days, which corresponds to 6.2% of the vaccinated subjects and 5.0% of the unvaccinated subjects. Women who were younger and had longer cycles before vaccination were more likely to experience an increase.

Although the menstrual cycle changes became apparent after vaccination, the differences were minor and disappeared in the next post-vaccination cycle. However, more research is needed to elucidate this association and to investigate other changes, such as unexpected vaginal bleeding and pain during menstruation, and to identify factors that could lead to these changes.