Home » Soy and Infertility: Is There a Link?

Soybeans have become increasingly popular in recent years as more and more scientific evidence suggests they are a healthy form of meat-free protein capable of lowering cholesterol and decreasing the risk of heart disease, breast cancer, osteoporosis and certain symptoms of menopause. However, not all experts have the same view of soy and some studies have linked soy consumption to infertility in men and women alike. While many people associate infertility with certain hereditary and medical conditions, truthfully your diet plays a huge role in your reproductive health. Infertility is a growing concern for men and women throughout the US, and research has shown the dangers of soy consumption are a major contributing factor to the mounting infertility problem.

Soy foods and other legumes contain phytoestrogen called isoflavones. The two primary types of isoflavones contained in soy are daidzein and genistein, which act as both estrogen and antiestrogens in the human body. While the estrogen properties of these isoflavones are known to protect against breast cancer and benefit women undergoing menopause, scientists have also discovered a link between estrogen components in soy and infertility. In a 1994 report published by the American Journal of Clinical Nutrition, researchers concluded that high soy levels can lengthen a woman’s menstrual cycle by two-and-a-half days on average and cause a decrease in both luteinizing and follicle-stimulating hormone levels. That being said, you would have to consume 60 grams of soy protein each day for one month to affect these hormone levels. 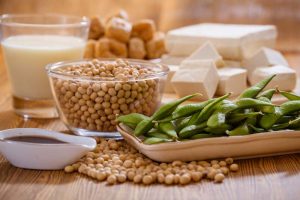 Four years later in 1998, the American Journal of Clinical Nutrition released another study performed by the Department of Pharmacology and Toxicology. Unlike the previous study, researchers didn’t find any major differences in fertility and follicle development after injecting prepubescent rats with genistein. However, more recent research performed in 2005 by King’s College London, in which scientists studied genistein’s effect on mouse and human sperm, found that sperm recently exposed to genistein was over 300 percent more likely to lose the caps that help them penetrate female eggs, providing further evidence of genistein’s negative effect on the reproductive system.

The Dangers of Genetically-Modified Soy

Soy consumption has been on the rise in recent years as the popular legume is extremely cheap to manufacture and increasingly found in a myriad of food products. However, very few people understand how dangerous soy, especially genetically modified soy, actually is. The side effects from eating a diet high in soy are particularly damaging to women’s reproductive systems and the sperm count in men. Needless to say, if you’re trying to conceive, it may be a wise idea to avoid genetically modified soy or soy altogether. After all, giving up a veggie burger or two is a small price to pay for the joy of bringing a healthy new life into the world.