Uterine fibroids are one of the most common gynecological conditions affecting women worldwide, with prevalence rates of anywhere between 5 percent and 50 percent. These benign growths in or around the uterus cause various symptoms, such as menstrual irregularities, pelvic pain, pressure, heavy periods, fatigue, and back pain.

Uterine fibroids are so common that they cause more than 100,000 surgical interventions annually in the United States. It is estimated that by the time a woman reaches menopause in her early 50s, she has almost a one in two chance of having uterine fibroids. Other estimations predict that 70 to 80 percent of women will have some level of uterine fibroids at some point in their life.

Although the exact cause of uterine fibroids is not fully known, research and clinical experience do indicate a number of factors that contribute to their onset, including; genetic changes, hormones, growth factors and cellular changes.

While phthalate exposure been shown to be associated with a myriad of health problems, including endometriosis, breast cancer, and preterm birth, a new study suggests that exposure to this common plasticizer may also increase the risk of developing fibroids, adding just one more risk factor to the list. Here we dive further into discussing the links between exposure to phthalates, endocrine disruptors, and the development of uterine fibroids.

Phthalates are a group of chemicals found in many types of consumer products. They are used in manufacturing plastic and vinyl to add flexibility and durability. Phthalates are also commonly found in cosmetics, hair gels, soaps and perfumes, deodorants, and nail polishes. In some breast cancer studies, phthalate exposure has been tied to increased risk for the disease. 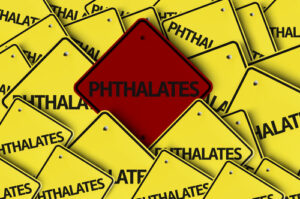 In studies looking at the impact of phthalates on reproductive health, it has been concluded that these chemicals “may induce alterations in puberty, the development of testicular dysgenesis syndrome, cancer, and fertility disorders in both males and females.” In addition, at the hormonal level, phthalates have been found to modify the release of hypothalamic, pituitary, and peripheral hormones, all of which can have a significant role on biological processes such as fertility.

In addition to affecting fertility health, a new study published in the journal Environmental Health Perspectives suggests that exposure to phthalates may contribute to uterine fibroid risk.

Evidence on Phthalates and Fibroids

Currently, the leading theory on uterine fibroids is that they are caused by stretching and irritation of the uterus during pregnancy, childbirth, and menopause. Low levels of estrogen have been found to contribute to fibroid growth. Phthalates work in “molecular mimicry” to block reproductive hormones from reaching tissues in the body. As a result, phthalates promote inflammation and bleeding in tissues throughout the body, including the womb.

In the new study, researchers from the American Society for Reproductive Medicine 2018 analyzed the underlying relationship between fibroids and phthalates, specifically phthalate exposure and the growth of uterine fibroids. Researchers found a link between exposure to phthalates and an increased risk of fibroid development. Women who had higher levels of phthalate metabolites in their urine were 55 percent more likely to develop fibroids during the study period than women who had lower levels of these chemicals in their bodies.

As previously mentioned, phthalates exposure can come from a variety of everyday factors; from soaps, shampoos, lotions, packaging and perfumes. Because of this prevalence, researchers look for metabolites in urine samples to determine phthalate exposure in women when conducting research. By these measurements, they have found that women with higher levels of phthalate metabolites were 55 percent more likely to develop fibroids during the study period than women with lower levels of these chemicals in their bodies.

Critical reviews of this study report findings that offer several possible explanations for the relationship between phthalates and fibroids. First, the findings do not address phthalate exposure from other sources, such as food packaging and food preparation utensils. Second, the study did not account for other possible risk factors contributing to uterine fibroid development. Third, the study did not account for diet or body weight differences, which can affect phthalate levels. Also, because the study was conducted in women of reproductive age, it is unclear whether phthalate exposure may contribute to the development of fibroids or whether women who already have uterine fibroids are more vulnerable to phthalates other endocrine disruptors.

At the end of the day, the link between phthalate exposure and uterine fibroid risk is yet another health concern related to plastic consumption and chemical exposure, a prevalent part of the modern diet and everyday beauty habits. For example, when food is stored in plastic containers and bags or heated in plastic containers in the microwave or stove, phthalates can leach into food. Phthalates have also been linked to type 2 diabetes and heart disease. These findings are important as they shed light on the chemical makeup of common food packaging and suggest another possible connection to health problems. The discovery that phthalates can contribute to uterine fibroid risk is also a reason for caution in using plastic products. In Europe, the European Parliament has proposed a new commission resolution on reducing exposure to endocrine-disrupting chemicals, which include phthalates. These findings also raise concerns about the transgenerational effects of exposure to endocrine disruptors.

While there is no doubt that avoiding phthalate exposure completely can be a difficult task, there are steps that can be done to limit the amount of this chemical in day to day situations.

Additionally, it is best to avoid chewing or sucking on soft plastic or vinyl products, nail polish coated fingernails, or hair if it has been washed using products that may contain the chemical.