In-vitro maturation (IVM) is a fertility treatment that involves maturing eggs in a lab, and it is a great alternative to traditional methods.

In-vitro fertilization (IVF) has been a common method of treating infertility for years. It involves collecting mature eggs from ovaries and fertilizing them in a lab environment before putting them into the uterus. Though this method is often successful, it can be expensive and exhausting. New innovations have made the process of IVF easier, safer and cheaper.

In-vitro maturation is a relatively new treatment that is supposed to be safer and cheaper than regular IVF. Under natural circumstances, only one egg grows to maturation during the menstrual cycle. Usually, when eggs are collected for IVF, the woman is given fertility medications to mature multiple eggs at one time in order to increase success rates. During in-vitro maturation, the immature egg sacs called follicles are collected, and then the eggs are matured in a laboratory environment outside of the ovaries. Instead of using fertility drugs to stimulate ovulation and then collecting mature eggs only, the eggs are removed while they are still in one of the primary stages of growth.

What Happens During the Process? 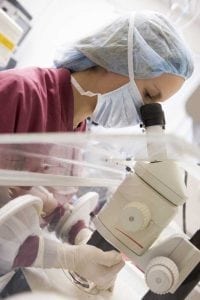 A few days after natural menstruation is ended, the woman will undergo an ultrasound examination to ensure that multiple early follicles are present. If they are, then a small dose of human chorionic gonadotropin (HCG) will be administered a few days later. 36 hours after the woman receives the HCG, the follicles are collected and the eggs are removed. The immature eggs are incubated with special cultures and small amounts of hormones for one to two days. After the eggs are matured, they can then be fertilized and placed in the uterus.

Who Should Choose IVM?

In-vitro maturation is an ideal choice for people who are at risk of reacting badly to extensive fertility drugs. Ovarian hyperstimulation syndrome (OHSS) can be extremely dangerous, so it is best if it can be avoided by not taking as many fertility medications. Recovering cancer patients and women with polycystic ovary syndrome are at a high risk for OHSS, so doctors often recommend that they use in-vitro maturation. If the couple knows that the male is the only one who is contributing to infertility, then in-vitro maturation can be a good way to begin fertilization without giving the female unnecessary drugs. Since in-vitro maturation does not require constant monitoring and expensive medications, it is shorter and cheaper than conventional methods.

Are There Any Risks?

Most of the risks of in-vitro maturation are just the general risks that patients may face when an anesthetic is used. However, fewer eggs are collected during in-vitro maturation than during the usual IVF, so patients run the risk of having to do the process all over again if none of the eggs work out.

How Successful Is the Process?