Researchers have recently discovered a genetic variant linked to endometriosis that has helped them develop a safer potential treatment.

Endometriosis is a painful condition that affects one out of 10 women, and it can lead to infertility in severe cases. Researchers are unsure of the exact causes of this disease, but they have determined that genetics plays a definite role in a woman’s likelihood of developing it.

Endometriosis is a condition that causes complications during parts of the menstrual cycle. The problem occurs when the lining of the uterus, which is shed during a woman’s period, grows outside of the uterus. When this tissue grows in anomalous areas, pain and complications can result when a woman’s body tries to shed it during menstruation. Current treatments usually involve hormone treatments that stop the menstrual cycle, causing side effects and even infertility.

For many years, researchers have been observing a group of families who experienced high rates of endometriosis. Since genetics was known to be a determining factor, clinicians endeavored to find specific areas of the genetic code that would point to a cause. 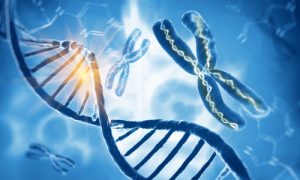 Recent studies have narrowed the focus on areas of chromosomes that are believed to affect women’s likelihood of developing the condition. Current findings have pointed to a genetic variant that was common in women with the disease. This gene is referred to as NPSR1, which is an abbreviation of neuropeptide S receptor 1.

Researchers from the University of Wisconsin, Oxford and Bayer Agricultural narrowed down the NPSR1 gene variant as a predictive characteristic in women who reach later stages of endometriosis. Studies involved genetic tests on rhesus macaques and humans that helped provide clues about the gene variant. The results of these tests also led researchers to consider some new nonhormonal drug therapies.

Building on research that began in the 1990s, studies examined DNA from 850 animals and about 7000 women. Comparing subjects that had the disease with subject that did not, the NPSR1 gene variant was confirmed as a common link in lab subjects with the disease. With this important new information, scientists conducted tests on mice that involved blocking the effects of NPSR1 with a molecule that the researchers called SHA 68R. Animals that were given the treatment experienced decreased levels of pain and inflammation.

The new therapy approach is promising, but there are still some questions about the condition that haven’t been answered. Researchers found that there were some patients who didn’t have the gene variant. Linda Griffith, an endometriosis specialist at the Massachusetts Institute of Technology, stated that the inconsistencies in research could mean that there is more than one variant of the disease.

The current team of researchers believes that they could find more answers by testing the therapeutic molecule SHA 68R on monkeys. The leading author of the study, Thomas Tapmeier, has described their current progress as just the “end of the beginning.”