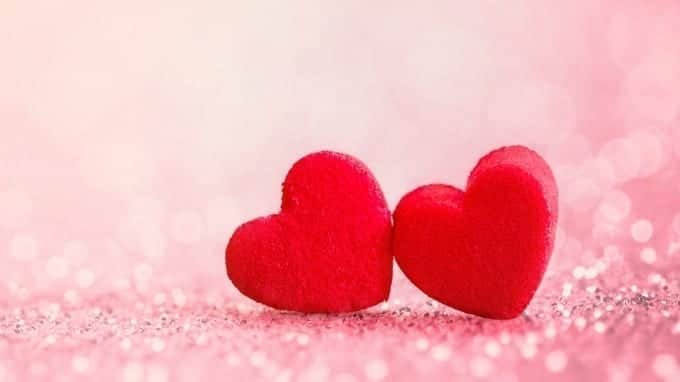 Oh wait. Nope. This is where my fairytale abruptly stops.

Like many others, our story began with hope, but quickly dwindled into sadness and frustration. Our battle with infertility began when I was 31 and my husband was 30. In preparation for our little bundle of joy, I stopped taking my birth control five months before our wedding. After the first month of “trying,” my period disappeared. I was ecstatic! I thought to myself, “That was so easy!” I began looking at pregnancy announcements and scrolling through Pinterest for fun ways to surprise my parents. Little did I know, I was about to endure years of negative pregnancy tests, heartbreaking surgeries, painful injections, and depression.

I took countless home pregnancy tests, but they kept coming up negative. This went on for 6 weeks before I decided to call my OBGYN to schedule a blood pregnancy test. While at the appointment, my doctor asked me if I had ever been tested for Polycystic Ovarian Syndrome (PCOS). This syndrome, I later learned, affects nearly five million women in the U.S. and is the leading cause of infertility. PCOS is a complicated disorder that presents itself a little differently in the woman who have it. Of course I had never been tested for PCOS: why would I need to be tested? I was healthy, I was fit, and I had never missed a period. Yet, one blood draw and ultrasound later: I had PCOS. I still remember the OB telling me I would never have children naturally. I cried. Oh, did I cry. And then…I researched. I read anything and everything there was to read about PCOS. It became my life.

On the medical front, my OB kick-started my period with progesterone and started me on the drug Clomid. This drug affects everyone differently. I know many women who have successfully become pregnant on it. For me, however, the outcome was negative, and the side effects were terrible. I had burning hot flashes, mood swings, and 45 days cycles. After three months, I was referred to a Reproductive Endocrinologist (RE). This portion of the journey began with lots of testing. Bloodwork, ultrasounds, and a hysterosalpingogram (HSG). I was started on Letrozole (a drug to which women with PCOS often respond well), and I started with routine ultrasounds, trigger shots, timed relations, and a few intrauterine inseminations (IUI). Talk about keeping the passion alive (did you pick up on the sarcasm?!). The RE monitored my egg size with daily blood draws and ultrasounds. This went on for 6 months. Every month there was a mature egg; every month, there was still hope. 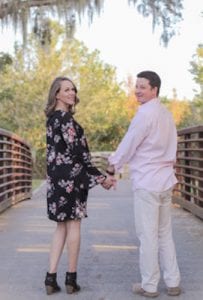 Six months came and went, but still no pregnancy. Our next step was In Vitro Fertilization (IVF). Our RE requires every patient to attend an IVF class prior to signing consent forms. I had no idea what to expect when I walked into the classroom, but what I will forever remember was the huge number of people in attendance. The auditorium was packed! For the first time, I didn’t feel alone.

By this point, I was waitressing at night to help pay for the treatments. A round of IVF, including medications, costs $18,000 on average. This doesn’t include the embryo transfer, which typically costs $5,000. We are not wealthy people, but we are hardworking middle-class Americans who wanted to be parents and don’t believe in credit card debt. So, if that meant working to make an extra $100, you better believe I was going to pick up a shift. We signed our consent forms, attended the injection class, and began another round of testing. After a routine saline sonogram, the RE found that my uterus contained a septum – a form of a congenital malformation where the uterine cavity is partitioned by a longitudinal septum. Great, I thought, another hurdle to overcome. I had surgery to remove it and thus began phase 1 of the IVF process: egg stimulation.

As our egg retrieval date moved closer, we became increasingly excited. Finally, after all of our hard work (emotionally, physically, financially) and years of struggle, we would have our little embryos.   For 11 days, I administered nightly injections (26 total) and visited my RE for early morning bloodwork and ultrasounds. Justin played his part in the process with love and support (which was invaluable) and a few dates with a collection cup. He will tell you that there is no pleasure in this role, but it is indisputably better than bruises and needles. If we got a baby out of this self-mutilation, it would all be worth it. On day 11, we finally were told that my eggs were large enough to be aspirated. Game on! We triggered and 36 hours later I was on the surgery table (again).

Surgery went great. They took out 24 eggs, 20 were mature, and the next day we got the call that 10 fertilized. Prior to incubation, an Embryologist grades the embryos grade to determine which ones have the best chance of being healthy and resulting in a successful pregnancy. On day 3, our Embryologist called and said we had 6 A’s and 4 B’s. We were so excited, but we knew the number would likely decline. On day six we were expecting to hear the nurse call and say, “You have X number to freeze,” but we certainly weren’t expecting to hear what she actually said. She began by saying how sad she was to tell me this: “No eggs made it to day 5.” I looked at Justin with such sadness that he immediately knew. He welled up and had to leave the room. All hope was ripped from our bodies. Shortly after, a feeling of emptiness began to set in. I can’t really remember what the nurse said after that. I just remember hanging up and weeping. I cried because I was sad, yes, but I really cried because I knew how bad Justin was hurting.

I was not going to let infertility define us. This was not our destiny. We were meant to be parents and I sure as hell was not going to let PCOS get the best of me. We started the stimulation process again. Oral medications, nightly injections, 7:00am appointments for ultrasounds and blood draws, bruised veins from injections, the trigger shot, and finally, surgery (again). The nurses at the surgery center remembered me. One nurse in particular was so kind and comforting, it still brings tears to my eyes. I asked about her kids, she asked about my family, and then off I went…for my 3rd surgery in 6 months.

This time, 5 little embryos made it to day 5. They were sent for genetic testing, and three healthy ones returned. Based on the Embryologist grading system, we had an A, an B, and a “no call.” A “no call” means they are unable to determine the normalcy of the embryo based on the sample they received. The transfer phase was next. I received my calendar from my nurse and started on oral medications and progesterone. My lining and labs looked great and on day 11 we transferred our perfect little grade A embryo. The following 2 weeks were the longest 2 weeks of my life. I went in for my blood pregnancy test and a couple hours later, I got the call…embryo A did not make it. We were not pregnant.

Infertility is a strange place between hope and pain. My desire to carry and give birth to a child was strong, but my body was failing me. I had been through so much and I didn’t know why God was doing this to us. Why us? It felt like my world was crumbling and all faith was lost. I was a different person; I was so broken.

I found myself alienating fertile friends, avoiding events with children and young families, and feeling overcome with anxiety. Most importantly, my relationship with Justin was suffering. He did his best to support me, but I was a ball of sadness, which projected onto our relationship. I was quick-tempered and found myself lashing out for no reason.

Justin and I the made the decision to take a year off and regroup. We vacationed, we ate well, we worked out, we saved money and we reconnected. By the end of the year, I was clear-minded and we decided to transfer embryo B. This time however, we did things differently. We decided to use intramuscular progesterone injections (nightly injections with a 22 gauge needle to the butt). I had a scratch test done 30 days prior to transfer and I took a baby aspirin. It pains me to say, but I also had lower expectations. I realized I had done everything I could and it was up to God to make that little embryo stick. We transferred on April 5, 2017. On April 14, which happened to be Good Friday, I got the call…YOU. ARE. PREGNANT.

I couldn’t believe it. I had to pull over I was crying so hard. Literally, hyperventilating. I gathered myself and began making calls. For years, I had dreamt about how I was going to tell Justin and my family. I replayed it in my mind a thousand times but I was too excited and my ideas went out the window. I called my brother Ted and my sister Lynne. Later, I called my parents. They cried with joy. It was magical. 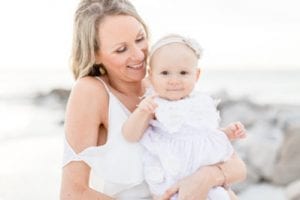 I waited for Justin to get home from work. He wasn’t even into the living room when I blurted out, “It was positive! We’re pregnant!” He was in pure shock. He couldn’t believe it. All those years of pain and suffering came down to this very moment. While we were overcome with joy, we knew our journey was not over. At 6pm, every night for the next 10 weeks, Justin administered my intramuscular progesterone shots (70 in total!). After 10 weeks we were cleared and began maternity visits with the OB. Our first ultrasound was amazing. Embyro B was becoming a little baby.

Nine months flew by and my pregnancy was flawless. Logan Elizabeth was born happy and healthy on December 18, 2017. The emotional support of my husband, my brother, my sister, and my parents is how I survived this journey. Whether it was a proverbial shoulder to cry on, a sympathetic ear for my sad and bitter words, or support through my erratic and hormone-driven emotions, I am so grateful for every one of them.

Infertility is isolating. Every day, it was another pregnancy and birth announcement on Facebook, and it began to seem like every week another good friend was getting pregnant. However, without that intense battle of fighting for what I know my body was created to do, I wouldn’t have baby Logan. I would choose infertility over and over again if every time it led me to her.

I am here today in one piece (just barely) because of my willingness to speak openly about our struggle and because of the support I received in response. Slowly, week by week, month by month, Justin and I inched toward our goal, reminding ourselves that our path was a different one, a slower one, but we were on it. Every day, I can be thankful for my healthy baby girl. What a beautiful miracle she is.